like a drifter I was born to walk alone.... 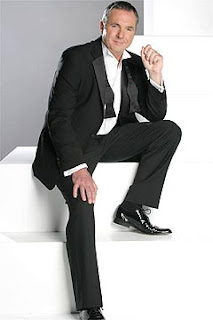 Was it really five years ago that I last went to the Walkabout, largely out of curiosity it must be said, to see what Dr. Karl Kennedy off of Neighbours sounded like performing in a band? Apparently it was. Time flies, eh? He was great. I didn't really know what to expect, but what I got was a much-loved character from a much-loved soap opera performing largely covers in front of an ecstatic crowd.

Truth be told, not much has changed since then: we're all a bit older, and the crowd is quite a lot thinner, but Alan Fletcher a.k.a Dr. Karl is still in Neighbours and is still performing at Walkabouts across the UK during his summer break from filming. The support band is apparently the Trent FM houseband, and once their bassist finally makes it up the ice-stricken M1 (the keyboardist never makes it), we are treated to a set of appalling karaoke covers. It's bad enough that they massacre their way through songs like "Summer of 69", "Freebird" and "Sex on Fire", but when they slaughter "Mr. Brightside", there can't be many people in the room who don't want the band to just stop. Apart from anything else, the singer is awful. His inability to hit the notes is bad enough, but his complete and utter lack of irony or self-awareness in his performance is frankly awe-inspiring. Awful. They are, however, notable for having perhaps the smallest drumkit I have seen outside of Rock Band (actually, it might actually have been a Rock Band drumkit....)

Fletch, of course, is well aware of what he is. Let's be honest: he's 53 years old, for the last 16 years has had a nice cushy job in one of the world's most popular soap-operas, and during his summer holidays, he gets to play the rock star in front of screaming crowds of adoring fans. Alright, so there aren't that many people in the house tonight, but the ones that are here are very, very enthusiastic. He plays a set of enduring, sing-a-long classics mixed in with a couple of his own tracks. What's not to like about that? He's living the dream. He clearly knows the whole thing is ridiculous, but everyone has a good time, so where's the harm? It's just a bit of fun.

The backing band this time around are called "The X-Rays", and appear to be mostly made up of young British musicians instead of his usual band, The Waiting Room. They're pretty good. The setlist is different to last time, but is very much more of the same: Livin' on a Prayer, Glamorous Indie Rock and Roll, Here I Go Again, Champagne Supernova, We Are The Champions, Use Somebody, Chasing Cars, Let's Dance to Joy Division, I Bet You Look Good on the Dancefloor (The Arctic Monkeys were apparently in the rehearsal room next door to Fletch when he warmed up for his 2005 tour in Sheffield).... all delivered with great gusto and with a smile on his face. THIS is how you do a set of covers - support band please take note. It's a fun night. Maybe it's not quite as good as the first time, but it's still a whole lot of fun (although I could have done without his rhythm guitarist's awful "rock" singing on "Chasing Cars", even if the other guitarist's version of "Livin' on a Prayer" was AWESOME. What a record that is....). "Susan", sung to the tune of Smokey's "Alice", is a show-stopper, of course ("Susan? Who the fuck is Susan?" etc.) .

Goodness, Susan and Dr Karl have been through an awful lot, haven't they?

Fletch gives it everything. Even when he's finished singing, he makes it clear that he'll do his best to shake hands, sign autographs and pose for photos with every single person in the room if necessary.

A very entertaining night. Fletch is a legend.