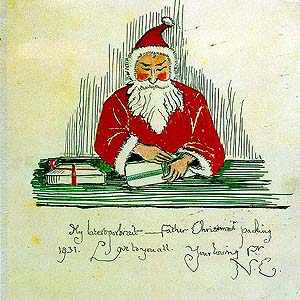 I've been on Santa duty unusually early this year.  You might remember that, for the last five years, I have had the heavy responsibility of being the pen of Father Christmas for two young girls... the daughters of a colleague of mine.  Every year, towards the end of December, my colleague would bring in the letters (complete with pictures) that her daughters had put in the chimney for Santa, and my job was to write the replies.  Mostly expectation setting, but with a hefty dash of Christmas magic thrown in too.

When I started, I hadn't quite appreciated that this was going to be a job for life... but the kids loved it, and they began to check the handwriting of everyone that they could.  The very fact that they could not identify the writing on those letters became de facto evidence of Santa's existence.  In fact, so great did the handwriting obsession become, that I was very quickly forbidden from allowing any of my handwriting to appear before their inquisitive eyes: all Christmas cards and postcards had to be written by someone else as they absolutely could not be written by me.  I love it.  It's great to see the world through the eyes of a ten year-old child every once in a while.

We had to be a little more organised this year: the family moved to Australia, but as the kids have apparently been avidly checking the handwriting of all their Australian relatives, it seemed that demand was still high.  So I had to dig out my special Santa pen and ink a little earlier than usual in order to (comfortably) make the post in time to reach Australia before Christmas.  My (now ex-)colleague had to be more organised too... getting her children to write their letters and then going through the whole process of explaining that no, Santa didn't have a supplementary base at the South Pole but that yes, he would be paying a visit as usual.  Ellie, the younger daughter sounded very enthusiastic and she had also drawn a picture of Rudolph pulling Santa in his sleigh. The letter read:

The Guinea - Pig Family. And plese can I have a karokie CD  Some new slip on shoes, A Solvanian family cotage and some surprises.

(bless her.  Completely seperately, she also enquired through her mother how our cat was getting on in all the snow!)

Thank you for such a lovely picture and letter.  Every year your pictures get better and better.  Rudolph looks fantastic!

It was very exciting for the collection fairy to go all the way to Australia to collect your letter and I am very happy to have you on my Australian route this year.  The reindeer especially enjoy travelling to Australia as they get to spend some time with the kangaroos.

I hope your new family gets along well with the other Sylvanian families.
I wish you a very Happy Christmas in Australia and I hope you enjoy all your presents.

Lots of love
from Santa

Hannah, the elder daughter, nearly at the age where she perhaps doesn't really believe any more, was a little less chatty and excited.  The sketch on the front (pencil) looks like flames reaching up to ignite 3 stockings labelled M & D, Ellie and Hannah.  Her letter read:

As her mum wrote, "sigh.  I can't help but feel that the magic wasn't quite in the air.  Still I guess I should be glad that she at least plays the game for Ellie's sake."  (I think she was told that if she didn't believe, she didn't receive....)

Dear Hannah
thanks for your letter.  Its nice to know that you still keep in touch as the years go by.
I hope your presents meet with your high standards and that you have many happy days of shooting ahead of you.
Enjoy your second ever Christmas in Australia
Lots of love
Santa

PS any chance the chimney could be cleaned for next year?

All safely in the post as of this morning, with some labelled gift-tags and with the envelope studiously addressed by the guy who sits behind me at work and the Christmas card written by my wife.

I'm not big on lots of things about Christmas, but this bit of it, I love.
Posted by swisslet at 19:50