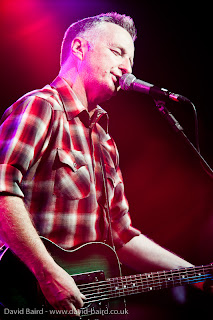 Photo of Billy @ Rock City from David Baird, who had these online before BB had even left the stage.
Billy Bragg @ Nottingham Rock City, 2nd December 2010

I think I've now seen Billy Bragg performing live something like a dozen times - more than anybody else.  Considering he's usually just one bloke with a guitar and a not-all-that-good singing voice, I never seem to find him boring.  He's been quite visible in the British media over the last few years, and is something of the left-wing rent-a-quote, what with his campaigning against the BNP in his home town of Barking, or urging everyone to vote tactically to keep the Tories out.... to steal a line from the Manic Street Preachers, Billy Bragg is just a "big nosed c*nt", isn't he?

Well, he'd probably agree with that assessment, on the whole.... but actually he's a whole lot more than that: he's a singer, he's a poet, he's a soap-box speaker, a stand up comedian, a tireless campaigner and fundraiser (his Jail Guitar Doors charity is brilliant - and he's going to HMP Nottingham at some point today to deliver six guitars that the charity bought with money raised when he last performed in the city).  Above all though, he's an idealist.  He sees the best in people and doesn't want to ever give in to despair or to cynicism.  The world might well be a crappy place, but Billy Bragg is one of those people who will never stop believing that we can do something about it.  That is why I love him.

He talks a lot in his set.  He always does.  I don't think he can help himself.  Tonight he talks about the defeat of the BNP in Barking in May; he talks about cynicism and how he feels as someone who campaigned both for Tony Blair in 1997 and for the Liberal Democrats in 2010; he talks about the banking crisis; he comments on the World Cup 2018 decision ("well, at least we now know what David Cameron looks like sad"); he chats to his fans; he tells us how he used to listen to the BBC world service when he was on tour, but how the internet has changed all of that.. he talks a whole lot.  In fact, he talks so much that you almost wish he would just shut up and play some damn songs.  Almost.  It's part of his charm, and I think he knows it.  We're an easy crowd.  He likes Rock City.  He played a gig here on the night that the Conservatives were thrown out of power in 1997 and has fond memories of the place.  It's an old school venue that he says "still smells of piss and bleach".  He likes Nottingham too, and spent his afternoon looking for the hall where Nottingham University students are staging a sit-in to protest the raise in tuition fees.  He wants to show them his support, of course he does.  Sadly for him, it takes him some time to realise that the hall in question isn't actually in Nottingham town centre at all.

He does play some music too.  He opens his set with "The World Turned Upside Down" pretty much as soon as I've walked into the venue and got myself a beer, and through the course of the next 90 minutes or so, he plays his usual mixed bag of old songs, new-ish songs (many from the play "Pressure Drop"), a bit of Woody Guthrie, and he even treats us to a Christmas song that he's just written and is performing for only the second time.  Billy Bragg has several songs that bring a lump to my throat.  I've heard him play many of them many times before, but the effect is always the same.  I simply can't help myself.  "Levi Stubbs' Tears", the amazing "Tank Park Salute", "The Milkman of Human Kindness" and, of course, "New England".  It's a simple act, and it hasn't changed very much over the years: he's just one man and his guitar, fired up by seeing the Clash at "Rock Against Racism" in Victoria Park in 1978 and determined to try and make a difference whilst basically singing about girls who won't so much as look at him.  As his merchandise says, love him or hate him, there seems to be no getting rid of him.  Long may that continue to be the case.  I've seen him perform better sets in front of bigger crowds, but he's still fantastic value.

I know he's not everyone's cup of tea, but to me he continues to be a legend and an inspiration and I'm already looking forward to the next time I see him play.