Compared to some of the alternatives, I suppose there are worse addictions to have, I grant you.... but please don't underestimate the gravity of this compulsion. For starters, I've long since run out of storage space.

As my wife frequently points out, just how many t-shirts does one man need? It's not as though you can practically wear more than one or two at any one time, is it? But, as with any other addiction, the simple truth is that I just can't help myself. Even though I know, deep down, when I see that next really cool t-shirt and hear its siren call, that no matter how much I love it now, it will assuredly still end up in the bottom of a draw... I just can't resist.

I tried to have a clear out last night, but it's always the same: even if I haven't worn a particular shirt in at least the last 5 years, I will look at it in the bottom of the draw and remember all the good times we had and how we could still have those good times again.... but there's always a younger, prettier model that catches my eye when I get up in the morning.

In the end, I was ruthless with myself and forced myself to select about 10 t-shirts to be put into a pile to be looked at again in a few days to see if I can still bear to part with them.  That old Hatful of Hollow t-shirt, last worn extensively in early 2007? On the pile.  The World Rock Paper Scissors Society raglan that is at least a decade old and has clearly seen better days? On the pile.  That Detroit Red Wings Gordie Howe t-shirt, lovingly brought back by a friend from Canada that has always been far, far too big and has never actually been worn? On the pile.  It's a difficult process for me, and I've not even categorically decided that any of them are going yet.

But what can I do?  My head has been turned. 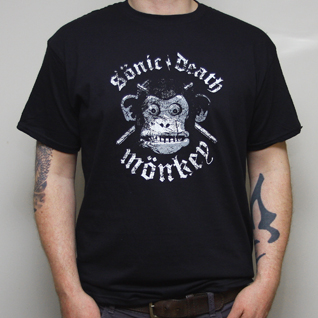 I ask you, how can anyone not have that t-shirt in their collection?
Posted by swisslet at 18:46