the blood that moves my body now covers the ground.... 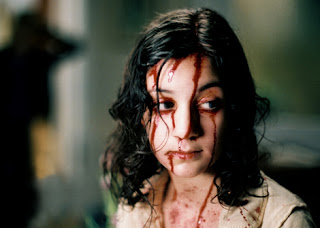 As is traditional, I spent a reasonable portion of the holiday season watching movies.  With the exceptions of "The Man Who Would be King" on Christmas Day (awesome) and "Indiana Jones and the Kingdom of the Crystal Skull" (which was exactly as disappointing as I remembered it being), I didn't actually watch any of these from the bumper festive TV schedules, but instead made use of the opportunity to watch some of the DVDs that I never seem to get quite get round to watching. Some of them I've seen many times before; others I was watching for the first time.  I like watching movies.

Amongst other films, I watched "In Bruges" (excellent, of course), "Trading Places" (the best Christmas film ever), "Wayne's World" (which was a landmark film in my life, but left C. entirely baffled as she watched it for the first time), "I Love You Philip Morris" (passably entertaining), "Scott Pilgrim vs the World" (alright, and certainly not terrible, but also really not all that), "Inception" (better when you don't fall asleep, but still pretty good when you do)..... and finally, last night, we got around to 2008's "Let the Right One In".

This is a Swedish film about an alienated young boy who befriends the strange and mysterious girl who moves in next door.  Through this girl, he discovers love and finds the courage to take revenge on the bullies who are making his life hell.

Oh, and the girl turns out to be a vampire.

The film was remade by Hollywood last year as "Let Me In", starring the boy out of "The Road" (Kodi Smit-McPhee) and the girl out of "Kick Ass" (Chloe Moretz).  I've not seen it, but I'm reliably informed that it's really very good indeed.  Well, if it's half as good as the original, then it's quite some film.

This film is brilliant.  I can't quite remember the last time that I watched a film quite this good.  A colleague at work was asking me today why I thought it was so good:

It's achingly beautiful and unmistakably Scandinavian, with lots of Bergman-esque silences that allow the atmosphere to build in the oppressive concrete jungle of a snowy Stockholm housing project.  The performances by the two leads, Kåre Hedebrant and Lina Leandersson are exceptional.  Leandersson in particular is incredible: just 11 years-old when she was cast, her performance as Eli is a study in restraint and stillness as she conjures up the sadness and loneliness at the heart of the vampire child.  It's quite a hard film to categorise: there are some elements of bloody violence, and much of the plot centres around murder and Eli's need for blood, yet the centrepoint is the touching friendship between the two young outsiders as it grows and blossoms into something that might be love.  24 hours after watching it, I can't stop thinking about it.

I learned, when reading up on the film later, that it is based on a novel by John Ajvide Lindqvist, who also wrote the screenplay.  I wanted to read it, of course.....In the old days, I would have had to wait before I had an opportunity to get to a bookshop or for it to be delivered.  Nowadays, I was able to immediately download it onto my kindle and spend the next couple of hours reading it before finally heading up to bed.  It's gripping, with many of the themes touched on by the film explored in much greater detail, and so sad that it makes my heart want to burst as I read it.

Both film and book are highly, highly recommended, and I await the February DVD release of the Hollywood remake with interest.

Twilight, True Blood and all those other Vampires novels have left me entirely cold, but Eli has stolen my heart.
Posted by swisslet at 20:51