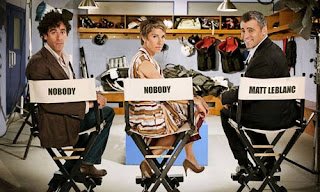 A new comedy programme made it's debut on the BBC the other day. "Episodes" received loads of publicity before its launch on Monday night: partly this was because it starred Stephen Mangan and Tamsin Greig, two very good comic actors with solid track records, not least with both appearing in "Green Wing". Personally, I can take or leave Mangan, but Tamsin Grieg is great and starred in one of my all time favourite comedies, "Black Books". Let's be honest, a programme starring those two would likely receive some sort of advance press coverage, at least in the UK, but the reason this one was featured all over the place was down to one simple thing, and they don't come much simpler than Joey Tribbiani: Episodes features Matt Le Blanc. "Joey" might have flopped, but it appears that the "Friends" connection (and Episodes was also produced by David Crane, one of the guys behind "Friends") was enough to generate enormous excitement.... at least amongst journalists like Caitlin Moran and others who cover ("squeal!") TV in the media.

I hadn't been planning to watch it, but it was on straight after another programme I'd been watching (a very good one featuring Ben Miller investigating the nature of temperature, actually), and I decided to give it a go.

I thought it was awful.

I know that the first episode of a new comedy programme is often a bit patchy as they work to set up the premise, and it may be that if I watched this one again after seeing the rest of the series, then perhaps I'd find it hilarious. As it was, it barely raised a smile. OK, so it was probably bold of them to restrict Le Blanc to about 2 minutes of screentime in the first episode, but that wasn't the problem. It just wasn't funny. In fact, it was annoying. The incidental music was intrusive; the characters had little or no chemistry (especially strange given that the two leads have worked together before to such good effect); the one-liners grated... I could go on. It was terrible. It featured a real-life car crash pretty early on, but frankly there was one unfolding before my eyes on the screen long before that.

The premise, if you're interested, is that a BAFTA winning husband and wife writing team are lured out to Hollywood to work on the US version of their hit show. Once there, it turns out that no one has watched their programme, and the US producers seem dead set on wrecking it by refusing to cast the ancient RSC type from the UK version of the show (played by Richard Griffiths) and replacing him with Matt Le Blanc. That's not an inherently UN-funny idea, but it was executed in a way that is perhaps hilarious to people who have had Hollywood wreck one of their programmes, but I'm not sure if it works for anyone else. Maybe it will get better, but I found Mangan and Greig's characters almost entirely, irredeemably unlikeable. Their snarky one-liners might work coming from the mouth of an American in a big US sitcom, but even in a Hollywood setting, they seemed oddly grating coming from someone as, well,  English as Greig. I smiled at the gag about the bath taking forever to fill, thus killing a spontaneous moment of passion, but not a glimmer after that. Ah, so the magnificent columns in your palatial house are FAKE. It's like everything else in Hollywood, right? I see what you've done there. The other characters were little better. Harsh to judge on the first episode, perhaps, but to me they were all no more than ciphers or caricatures.

Maybe it will get better as we get into it, but I won't be watching it to find out.

It is, of course, very popular at the moment to have a character playing a version of themselves: Larry David and Jerry Seinfeld have been doing it for years, after all. We perceive Matt Le Blanc in the terms of how we saw him as Joey Tribbiani, so I'm sure there's some comic mileage there for "Episodes"..... although quite how much remains to be seen. 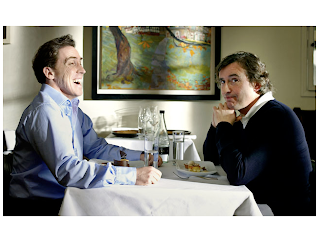 By way of contrast, I very much enjoyed watching Steve Coogan and Rob Brydon playing versions of themselves in "The Trip", and finally got around to watching the last two epidodes that have been sat on my Sky+ for several weeks. It was subtle, understated and brilliant, totally unlike "Episodes" so far. There's no showiness here, only two guys who we THINK we know, sitting in a series of restaurants in Yorkshire, chewing the cud and playing with our perceptions of who they are and where the characters on the screen ended and the actual people began: Rob Brydon as the cheerful entertainer, never happier than when doing impressions, and Coogan as the darker, more troubled figure with delusions to being something greater than a mere entertainer or even comic actor, resentful at being introduced as "TV's Alan Partridge". I found the final scenes actually quite moving, with Brydon reunited with his wife and baby child and Coogan returning to a vast, showy.... but also cold and empty.... appartment looking out over the City of London.

Of course, it's very English of me to prefer the low-key comedy about insecurity to the one that is big and brassy and features a huge star, but if Episodes ends up being half as good as The Trip, then they will have done well. Based on what I've seen, I doubt they're going to make it, Matt Le Blanc's fawning press coverage notwithstanding.
Posted by swisslet at 19:26