I've been reading "Emma" by Jane Austen. Well, I say that I reading, but I've actually barely looked at since Christmas.  It's not a particularly challenging or difficult read, and yet I'm finding it quite heavy going.

I go through phases with Austen: I actually studied her when I was at University, and in spite (or perhaps because) I was constantly being told how pointed and wry she was, and how she provided an incredibly pertinent and witty commentary on the role of women in Nineteenth century England, I found her dull and not especially funny at all.  Alright, so "Persuasion" probably isn't her finest work, but I could not escape the impression that my lecturers were reading far, far too much into the source material.

That said, "Pride and Predudice" is a cast-iron classic, full of pithy dialogue and wonderful character sketches.  The story is mostly about Darcy and Elizabeth, of course, but the minor characters are just as well drawn and often much more interesting. The way that Mr. Collins is described is priceless - either sticking his nose haughtily in the air or acting like a pathetic suck up - and Mr. Bennett is surely one of the great literary creations.  Take this to his silly wife:

"If my children are silly, I must hope to be always sensible of it... This is the only point, I flatter myself, on which we do not agree. I had hoped that our sentiments coincided in every particular, but I must so far differ from you as to think our two youngest daughters uncommonly foolish."

I love the way that, even though it is not explicitly described in the text, you can see his weary eye-roll as he quietly sits and listens to the prattle from his wife and youngest daughters.

Yes, it's a great book (even if I still don't agree with my University Professor's belief in Austen's proto-feminism....).  I will finish "Emma" off at some point, but so far it doesn't hold a candle to "Pride and Prejudice" and it simply isn't compelling me to finish it off in a hurry.

Don't you just love it when you find a book so good that you read it at every possible opportunity you have?  One that you sit up late into the night to try and finish?  All books should be like that, but I find that very few are, and when you are reading one, am I the only one who finds themselves torn by the desire to get to the end and the desire to make the book last as long as possible?

I've just finished one of those books. 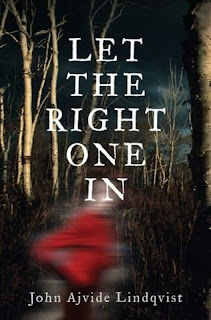 I watched the original film a week or so ago, and downloaded the book onto my kindle almost immediately.  A couple of days later, I was done.  It might have helped that the coverage of the Fifth Ashes Test from Sydney started at around 11pm each night, so I had another reason to sit up late... but the truth is that I was only keeping half an ear on the cricket and was almost entirely wrapped up in my book.

Lindqvist wrote the screenplay for the film, so not surprisingly it's pretty close to the book.... but at the same time, without the film's need for brevity, the book is able to expand a lot more on the background to many of the characters, especially Eli, the vampire child, herself and Håkan, her adult helper. [don't worry - no plot spoilers....]

To be honest, this is one of those rare examples where the film surpasses the book.  The extra detail within the book is gripping, but at times it sinks into some very bloody horror.  This isn't a problem per se, but by stripping this detail out, the film is better able to allow the silences to speak for themselves, and allows the viewer's imagination to fill the gaps.  We don't know as much about Håkan, for sure, but that frees us up to wonder about his motives and to think about whether or not his past is Oskar's future.  The book is still gripping, and the relationship between Eli and Oskar is as captivating and heartbreaking as in the film, perhaps more so, but it simply isn't quite as good as the film.  Mind you, I'd still say that this is the best book I have read that was published in this millennium.  It's just that it's also probably the best film too.

Read it.  Highly recommended.... and if "Choke" by Chuck Palahniuk turns up in the post tomorrow, then "Emma" will just have to wait a little bit longer.
Posted by swisslet at 21:44