I always thought you should follow your dreams, however hard and uncertain it seems.... 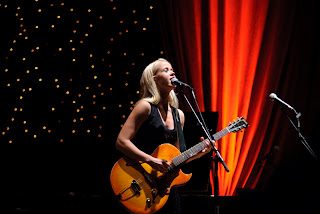 I can't really get used to Saturday gigs in Nottingham. It's not so much the day of the week, either. On the face of it, Saturday night should be the perfect time to be going to a gig... it is, after all, the classic night of the week for going out. It is this very fact, however, that causes a Saturday gig at Rock City or the Rescue Rooms to upset my internal gig-going rhythms. The venues, you see, hold well attended club nights on a Saturday night, so they set early stage curfews to make sure that they can get all of us out of the venue and tidy everything up before the clubbers arrive. I've missed the start of enough gigs now to know that this is how it works, but I just can't quite get my head around needing to be in the venue by about 7.30 and to be out onto the street again by 10pm. As I'm in town on Saturday afternoon anyway, I find myself killing a bit of time before heading straight over to the Rescue Rooms for a spot of tea (a very tasty pepperoni pizza) before heading in to catch the support.

I can't actually recall having seen Helgi Jonsson performing live before, but I must have done (and indeed, I have): I've seen Tina Dico performing several times now, and she never fails to mention him as a key collaborator. If I have seen him before though, then he's clearly not made that much of an impression on me as I don't recognise him at all. The venue is almost empty (with a stage time of 7.30pm, that's hardly surprising), but he still cuts a very slight, shy figure onstage. He's an Icelandic singer-songwriter, and much of what he does, including a cover of Roy Orbison's "Wild Hearts Run Out of Time", sounds very good.... and he's so thin and nervous-seeming that I find it impossible not to warm to him. The stage at the Rescue Rooms is hardly massive, but Helgi still does his best to disappear into the background.

He leaves the stage at the end of his short-ish set, but is quickly back as part of Tina Dico's band (who appear 15 minutes ahead of the advertised stage time, which can't really be helping the attendance: the venue is probably half full at best). Although she often performs alone onstage, tonight Dico is accompanied by both Helgi on keyboards and a drummer. Her songs work very well accompanied by only her own acoustic guitar, but the presence of the other instruments really allows them to breathe and to stretch their legs, especially on those songs where Helgi's vocals add a welcome counterpoint and support to Dico's own.

I think she's amazing. I first saw her some years ago now, but she's only grown in confidence since then and she's now an extremely accomplished performer. As I'm watching her performing songs like "Sacre Couer", "Room With a View", "Warm Sand", "Count to Ten" and "Copenhagen", it strikes me that she is at least as good as someone like Adele, but -- her native Denmark apart, where she is a superstar -- she will never achieve anything like as much success. Why that should be, I don't know and it hardly seems fair (as if fairness had anything to do with it). She certainly looks the part... but there's a part of me that is selfishly glad that I can continue to see her in small, intimate venues like this (albeit the Rescue Rooms, even half full, is probably a step up from places like The Maze and The Bodega, where I have seen her playing before.)

The crowd is pretty thin, although it swells towards the end (those early stage times catching people out again), but she is warmly received and, looking around, lots of people seem to know all of the words to her songs. It's a good set by an artist who just seems to be getting better and better.

Duffy's leaving the music business, I hear. Well, I won't be mourning her loss all that hard as long as there are female singer-songwriters with the talent of Tina Dico around.  If the gig attendance is anything to go by, then she hasn't made much headway commercially since I saw her here in 2008, but she's still worth a hundred Duffys.