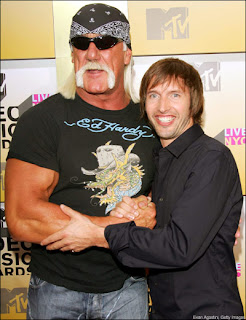 Ah, James Blunt.  Where to begin with a man whose surname has become rhyming slang for female genitalia?  He first came to my attention with a very, very nervous performance of "Goodbye My Lover" on Later... at some point in 2004.  I didn't think he was very good, to be honest, but was still curious enough the next day to look him up and later on to buy the album.  He appeared in an unpromising looking lunchtime slot at the next Glastonbury, and it was clear that word was getting out, as the crowd was huge.  Shortly after that, "You're Beautiful" became ubiquitous, "Back to Bedlam" became the biggest selling album of the twenty-first century in the UK and people started to really hate him.  Clearly, you don't sell 4m albums in the UK alone without having people like your music, but a very vocal majority has decided that they hate James Blunt: his voice, his background, his voice, his songs and, above all, his success.  Blunt's response to this hatred was to play up to his image as a feckless playboy, appearing in photoshoots in his pad in Ibiza, surrounded by bikini-clad models.  You might hate me, he seemed to be saying, but see how much your hatred bothers me.  Trying too hard?  Maybe.

LB was due to review this gig for the Evening Post, and as well as the usual "plus one", he was offered an extra pair of seats to the show.  He was kind enough to offer them to me, and although I wasn't bothered, C. was keen, so that was decided.  Like lots of other music fans, I am casually rude about Blunt all the time.  I have his first album, but hadn't bothered with any of the follow-ups.  I spent much of the day before the gig rolling my eyes and saying how it was going to be a bit of a chore, but what could I do?  The wife wanted to go, so.....  I'm not proud of this, but I'm a snob and I think I'm far too cool to attend a James Blunt gig.  I'm not cool at all, of course, but I still reckon I'm cooler than that.  We can probably all picture the kind of person who goes to a James Blunt gig: they don't go out much, and they probably only buy a couple of albums each year.  What do they know about music?  Besides, who goes to see a gig in a venue like the Royal Concert Hall?  It has plush, covered seats.  Are we seriously supposed to sit in an orderly fashion and be played to?

As James Blunt fans don't go to many gigs, they looked at the ticket and saw that doors opened at 7pm... so that's when they all arrived.  We arrived a little after 7.45pm, and they were already sat in their seats watching the support band.  They were also, it must be said, a little pissy about making way for us to squeeze past them to get to our seats too.  You know, when they don't stand up to let you through, but vaguely move their legs to one side and don't bother to move their bags at all?  Yeah, that.  Not a good start. (I'd also bumped into a guy in the bar who was moaning at the minimum wage bar staff about the lack of beer on tap, saying that he'd paid the price of entry and expected these things to be on... as if it was something the bar staff had any control over.  Yeah.  It was that kind of a crowd.  When I saw the Guinness was off, I just had an IPA.  That's how I roll.)

Support was Wakey! Wakey!  I don't think they were anything special, but considering that most support bands play to half-empty venues, it must be great to play a tour like this where almost everyone is already there before you start.  Perhaps sensing this, and picking up the generous welcome he was getting from the crowd, the singer was positively chatty.  I liked him: he was funny and self-deprecating.  His music?  Pleasant enough, in an almost entirely forgettable way.  They have a terrible name, but I'm sure they'll do very well.

Blunt, when he first came on, was awful.  For a massively successful artist who has been doing this for an awfully long time, he's still really awkward (and so posh it hurts).  He throws rock postures and gurns at the crowd, but he looks as though he is doing it halfheartedly and thinks he looks a twat doing it.  As a result, he looks like a twat.  The layout of the stage also does him no favours; putting the rest of the band on raised platforms behind him only serves to leave him isolated, unable to really interact with his band and uncomfortable interacting with the audience.  Lucky for him, the crowd are thrilled to see him and offer him nothing but love, in spite of his awkward start.  He apologises for playing so much new material, and promises that we will be rewarded with older stuff before the end of the night.  Actually though, it's the older stuff that seems to be dragging.  Perhaps it's over-familiarity, perhaps it's the fact that much of the older songs are quite down-tempo, but the set doesn't take off.  "Goodbye My Lover" seems to be well received, and although it's meant to be an emotional showstopper, I can't get past the fact that the lyrics seem to be all over the place.  Is he leaving someone?  Are they leaving him?  Is everything actually going okay?  Is someone dying?  Blunt can't seem to make up his mind.  Even "You're Beautiful" seems a bit flat to me, athough there is a priceless moment where Blunt steps away from the mic and allows the crowd to sing along.  We choose the radio edit.  Imagine that: an audience so polite that they won't use the bad word in a song.

The set really takes off when Blunt starts to play his newer material.  I've not heard any of it before, although it seems that somewhere along the line, Blunt has discovered the art of the up-tempo pop song.  Either that, or he's been listening to Paulo Nutini and decided he can do that, only without the cod-reggae accent.  Stay The Night, I'll Be Your Man, Superstar... all are bright, breezy and guitar-driven, and all of them get the crowd on their feet (well, except the reviewer for the Evening Post, who takes a little longer to warm up).  The teenagers on the balcony on the right seem to be having as much fun as the large lady on the balcony on the left, and the middle-aged lady who gets touched by her hero as he runs around the first tier looks like she'll never wash again.  It's actually quite good... he's really warmed up now, and you have to admit that the set has been paced really well.   He's still not really my cup of tea, but you have to take your hat off to him... He ends with 1973 and an awful a lot of people leave the show tonight happy, and I'm one of them, as entertained by a show as I have been for a while.  Admittedly, a lot of that entertainment came from my enjoyment of the James Blunt crowd as from Blunt himself, but I've had a much, much better time than I was expecting.

Oh, and in case you're thinking of laughing at the sort of person who goes to a James Blunt gig, then never mind me, perhaps I should point out that Carl Froch was there too.  Yeah, not such a wise guy now, huh?

A good night.  I never thought I'd be saying that.  Fair play to the man.

1) For a man standing on a raised stage, it seems remarkable that Blunt should feel the need to wear stacked heels, but somehow he does.
2) He reveals during the course of the show that he's playing the Royal Wedding.  Of course he is.
3) His older songs seem to be about not getting laid.  His new songs seem to be about shagging in the sunshine.  Who says success has changed him?

LB's review of the event can be found here.

Set list:
So Far Gone, Dangerous, Billy, Wisemen, Carry You Home, These Are The Words, I'll Take Everything, Out Of My Mind, Goodbye My Lover, No Tears, High, Superstar, Same Mistake, If Time Is All I Have, You're Beautiful, So Long Jimmy, I'll Be Your Man, Stay The Night, Into The Dark, Turn Me On, 1973.
Posted by swisslet at 19:28