it's like a later Tom and Jerry, when the two of them could talk.... 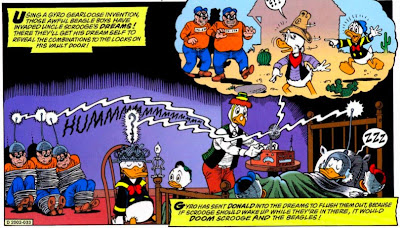 On Sunday evening, we watched The Social Network.  When the credits were rolling, C. turned to me and said, "Well, it's not a patch on Inception."  Both films have been nominated for eight Oscars at Sunday's Academy Awards ceremony, but although both have been shortlisted for the "Best Picture" award, and Christopher Nolan is up for "Best Original Screenplay", Inception has been ignored in the acting and directing categories, and is mainly up for the technical awards.  By contrast, as well as seeing Aaron Sorkin nominated for "Best Adapted Screenplay", The Social Network sees David Fincher nominated for "Best Director" and Jesse Eisenberg for "Best Actor".  Inception is hardly under-represented, and I'm not sure that I would say that the film has exactly been snubbed, but it does seems to be missing out in the bigger categories.

It's a film that seems to divide people: I liked it, and thought it was better and more interesting than The Social Network, but lots of people seem to get very agitated to see Inception described (as it often is) as an "intelligent film".  Here's Will Self on the subject in the Guardian the other week:

"No, Inception wasn't the last word in sci-fi meta-sophistication, but rather a stupid person's idea of what an intelligent film is like"

Ouch.  Although as I also saw someone saying today, "anyone who thinks that Inception is not an intelligent film has clearly never seen Meet The Spartans".

Anyway.  I'm not sure I care who wins at the Oscars, to be honest.  Since when has this been the benchmark of the quality of a film?  Didn't Avatar win a whole load?  Exactly.  Much though I enjoyed the film, I also see no reason to get all patriotic about the chances of The King's Speech, either.  Why should I?  Good luck to 'em, but hardly a cause to wave the flag, surely?

I won't be watching the ceremony, but I did have a chuckle this afternoon when I found this in the comments section of an article about why Inception should win the "Best Picture" Oscar (they've been running articles every day about each of the nominees).  When you read this, remember that Christopher Nolan has been nominated for "Best Original Screenplay", not "Best Adapted Screenplay":

"All you need to do [to find out exactly how original Inception is] is to read the Disney comic published 8 years before the film came out (2002) called, "Uncle Scrooge in the Dream of a Lifetime".
It's got everything.

Plucky thieves (the Beagle Boys) invade a dream to steal the combination of a vault - check.  After they're inside Scrooge's mind, the Beagle Boys have trouble differentiating dreams from reality -- again, exactly like the characters from Inception.
Donald uses "kicks" the feeling of falling to wake people from the dream. - check
In order to escape danger, Scrooge starts jumping from dream to dream, but like Cillian Murphy's character, he can't remember the last dream once he's in the new one. Donald, however, is the invader (like DiCaprio) so he alone is able to remember the progression.
Scrooge's old sweetheart even shows up in the 24-page comic. He hasn't seen her in 50 years. She may or may not be dead. And is there because of the guilt Scrooge carries over how he treated her in life.

It's a great movie. But if it does win an Oscar, the "I owe everything to Donald Duck" should be the first line of that acceptance speech!"

There's more on this here, and (if you Google it) all over the internet.  How funny is that?  Best Original Screenplay?  Are you sure?  Next they'll be saying that Nolan's other great work, The Dark Knight, was also based on some ancient comic book too.

I enjoyed Inception when I saw it at the cinema, but I do have to admit that I did fall asleep in front of it when I watched it on DVD.

Do you see what I did there?

Yeah, so maybe that's not an entirely original gag.  Feel free to nominate me for it, though.  Just be sure to credit ME with it.  Me.
Posted by swisslet at 21:32