just breathe in the air and blink in the light... 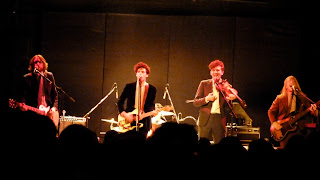 I was supposed to be going to see Elbow at the Nottingham Arena on St. Patrick's Day, with tickets purchased months and months ago.... and then a trip to New York intervened. To say I was devastated would clearly be an exaggeration: I've seen Elbow many times before and I'm not really a fan of arena gigs in the main, preferring where I can to see bands in a more intimate location. I wasn't going to cancel the trip, or miss the prospect of a night out in the Big Apple on St Paddy's Day, but I was a little disappointed to miss out on seeing one of my favourite bands play. I'll see them at Glastonbury in the summer, for sure, but still....

It was some consolation, when Marissa, one of my New York friends, told me that she was due to watch Noah and the Whale at the Bowery Ballroom whilst we were over visiting. She hadn't heard of them, but was accompanying a friend and wondered if we wanted to tag along. Well, yes.... obviously I would. I probably would have gone along to see almost anyone, as I love the idea of attending a gig in New York, but as it happens I was delighted at the chance to see Noah and the Whale. I bought "Last Night on Earth" at the same time as I picked up "Build a Rocket Boys!", and I much prefer it. Experience has taught me that Elbow albums are slow burners and tend to get better and better with every listen, but at the same time, Noah and the Whale really seemed to have pulled a classic out of the bag. 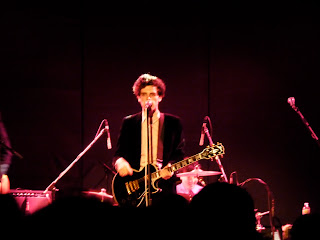 The band's last album, "The First Days of Spring" was something of a downer of a record. It's really good, for sure, but as it details the aftermath of Charlie Fink's breakup with Laura Marling, it's a little bleak, to say the least. Stark and sombre: I think it's fair to say that the poor lad was heartbroken. When I saw the lead single off the new album was called "L.I.F.E.G.O.E.S.O.N.", I did for a moment fear that he wasn't over it and that we were going to get more of the same, and wondered how much more I could take. Well, I was wrong: this is a completely different record altogether - a whole lot more cheerful than "The First Day of Spring", without ever slipping into the rather more twee whimsy of their debut, "Peaceful, The World Lays Me Down".

When I asked Marissa where the Bowery Ballroom was, she responded "In Bowery", which I didn't find all that helpful, to be honest.... but it turns out to be a small neighbourhood in the southern end of Manhattan Island with East 4th Street and the East Village to the north, Canal Street and Chinatown to the South, Allen Street and the Lower East Side to the east and Bowery Street and Little Italy to the west. Or more helpfully, a relatively short subway ride from where we were staying. It's actually quite a compact venue, with a capacity of a shade under 500 people, although it looks bigger. Physically, in terms of Nottingham venues, it's something like a cross between Rock City and the Rescue Rooms: about the same size as the latter, but with the floor and balcony of the former. It has a better bar too, both downstairs beneath the venue and in the main hall itself. In Rock City you have to put up with Tuborg, at the Bowery you have your choice of several drafts, including Sierra Nevada Pale Ale and Magic Hat #9. Mmmm. 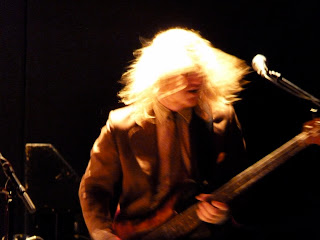 There's no getting away from it: the members of Noah and the Whale look entirely like they are the products of the English Public School System. There's nothing wrong with that, per se, but there's just something about that particular brand of floppy hair that screams of a private education... and that's before Charlie Fink starts speaking ("Are these guys some of yours?" Jane asks me at one point as Charlie mumbles, brittanically, into the mic....). They shuffle onstage a little sheepishly, but as soon as they start to play, things start to come to life. Fink himself is a fairly static presence on the stage, but it doesn't matter because the bassist, Urby Whale, is a blur of activity, flicking his long blonde hair and, in his movement, more than making up for the stillness of the rest of the band. They sound good too: songs like "Tonight is the Night", "Give It All Back", "Just Me Before We Met", "Waiting For My Chance to Come" and "Life is Life" -- all of the new album -- all sound fantastic.

21st March is the first day of spring in England though, so it is only natural that the band also play large chunks of their second album. It sounds good, but Fink is a smart enough performer to read the mood of the crowd and to insert an unscheduled, more up-tempo song into the setlist as he senses that "you guys really want to dance". It works. The set is reasonably short, with the band finishing with "L.I.F.E.G.O.E.S.O.N." and "5 Years Time", and then they are gone. In spite of being mildly irritated by the Irish guys standing behind me who seemed to have no interest at all in the band and every interest in their own witless conversation, it's a fantastic night with a band who really seem to have found their sound. Marissa left wanting to get copies of all of their albums, and considering she didn't even know who they were before the gig, that's got to be a good sign, right? 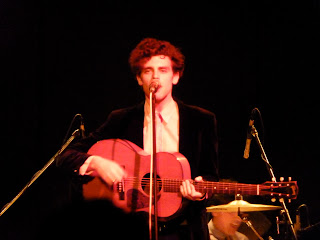 A week after the gig, and I'm still listening to "Last Night on Earth" about twice as much as the Elbow album.... it's really good.