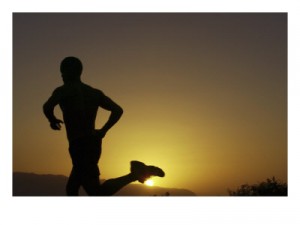 The clocks moved forwards this weekend and British Summer Time began. It never fails to amaze me how many people think it's suddenly worth remarking now how much lighter the evenings have become, as though shifting the clocks forward by an hour has absolutely nothing to do with that. Still, there's no denying that the longer evenings are welcome.

As I was driving home at about 7pm last night, the streets seemed to be filled with runners, many of them women.  There are always a few runners around each evening, for sure, but the lighter evening seemed to have dragged an unusual number out of their winter hibernation.  I actually quite like running in the cold and dark of winter, but then I've also started running wearing a t-shirt emblazoned with the logo "Punish Me", so perhaps that's just me and everyone else prefers the warmer weather.  Weirdos.

Longer, lighter, warmer evenings are clearly much more conducive to getting your trainers on after work and heading out for a run.... if only because the lighter skies mean that it's probably safer too, which would explain why there seems to be more ladies out for a jog. Another possible explanation is that we're entering Race for Life season, the series of 5km runs just for women organised by Cancer Research UK to raise money for their work. There are a couple in Nottingham this year, but the first one is in May, and it seems eminently possible that some of the new joggers out on the roads are starting their training for that. Hey, whatever works... not only do these races raise enormous amounts of money for a great cause and help to remember the victims and survivors of cancer, but if it gets people out and running, then that's good too, right?

I managed to find time to go out at lunchtime today. I've felt pretty fatigued after a long weekend and my legs haven't entirely felt as though they belong to me so far this week, but it was a beautiful warm, sunny day and I was happy to get away from my desk for an hour. I actually ran pretty quickly too, coming in at an average pace of 8.01 minutes per mile over the whole 4 miles, dipping under the 8 minute mile barrier on miles 1 and 4 (I always seem to dip in mile 2... no idea why).

It hurt like hell, and it was actually quite hot, but it's nice to know that you're alive once in a while (and...luckily for me... I don't suffer from Uhthoff's phenomenon: the worsening of neurologic symptoms in multiple sclerosis when the body gets overheated from hot weather, exercise, fever, or saunas and hot tubs. Could you imagine a life without saunas?)
Posted by swisslet at 19:02