concrete jungle where dreams are made.... 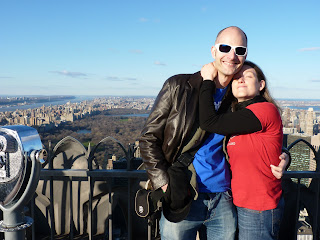 The view to Central Park from the Top of the Rock
You're probably sick to death of hearing me talking about New York now, but I promise that I'm almost done now. 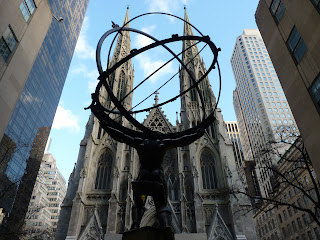 Atlas bows before St. Patrick's on 5th Avenue
Compared to previous visits, I suppose that we didn't really do all that much stuff in the five or six days we were in the city. One of the great joys of the time we took off from work last year were the friends that we made as we travelled around the world. We're still in touch with people that we met in places as far apart as Cairns, Cape Town and Bangkok and they now give us plenty of excuses for further travel as they live in places like Costa Rica, Bern, Vienna and...erm... Stockport. Of course, it's the New Yorkers that we met whilst travelling that made this trip to NYC so special. We met Jane in Africa and Marissa in SE Asia; one is a 20-something law student and the other a 30-something teacher. I don't suppose they have all that much in common apart from the fact that they live a few blocks apart around 8th and 9th Avenues in New York, but each was the heartbeat of our trips to those countries and both were kind enough to be willing to share their city with us when we came over. 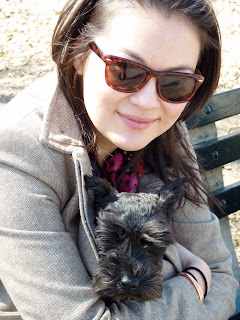 Jane and Bella stay warm in the Park
We landed on the afternoon of St. Patrick's day and the plan was, of course, to head over to a bar. Much to Jane's amusement, the bar picked by Marissa was one just by her law school campus, and one she was liable to be drinking in on any given Thursday night anyway. In spite of all of the "Kiss Me, I'm Irish" t-shirts, with an Irish grandmother, I was probably the most Irish person there (somewhat less Irish when watching the rugby on Saturday, I might add).  Still, if nothing else, we discovered that, in spite of liking none of the constituent ingredients, C. is a big fan of Irish Car Bombs. Jane is doing a summer placement in Belfast this year, and I did feel honour bound to tell her that she should probably take care before ordering that cocktail in some of the bars she might find herself in..... We crawled to bed at something like 04:30 in the morning and thanked our lucky stars that we didn't have to be up and teaching by 8am.... hats off to Marissa for having the stamina to do that, and for having the foresight to have planned that all her classes would be doing worksheets all day. 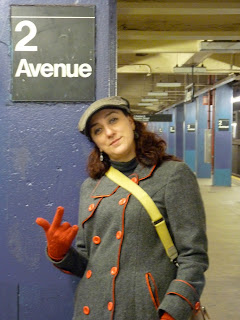 Peace, y'all
So we spent our time in New York hanging out with our friends and going to the kinds of bars where they knew the bar staff and to the restaurants that they wanted to try. It was nice. Jane was looking after her parents' dog, so we spent Sunday morning grabbing bagels from Barney Greengrass's famous Upper West Side Deli for brunch and then walking Bella in Central Park.... it was a beautiful crisp, sunny day, and just the sort of thing that New Yorkers actually do. We almost went to see a show, but unfortunately Matt Stone and Trey Parker's "Book of Mormon" was still in previews (just the idea of them doing a musical about that makes me laugh), so we went to the cinema instead to watch "Limitless" (is it meant to be a comedy, by the way? I couldn't quite see it in any other light....). 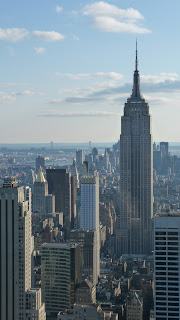 Empire State of Mind
We also went to the Bowery Ballroom to watch Noah and the Whale play on Monday night. They're a British band, and I'm pretty sure I could easily watch them play over here, but it somehow felt special to catch a show in New York. Review to follow at some point, I suppose.  It's a great venue, anyway: sort of like a cross between Rock City and the Rescue Rooms.  Better beer, mind - I was on Sierra Nevada draft.  Something of a cut above the piss they serve in venues here. 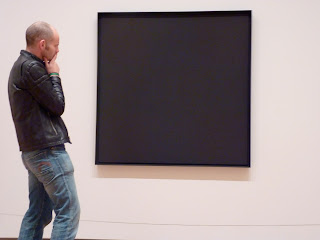 Contemplating Ad Reinhardt's use of shades of black at MOMA / Looking for the remote
We did do some touristy stuff - ironically because Marissa was keen: we popped into MOMA to have a look at the Andy Warhol film exhibition (and to remind myself how much I dislike Picasso.  Cardboard guitar? Pfff); we went on an art tour around Rockefeller Plaza and then checked out the view from the Top of the Rock; we went for a 5 mile run in Central Park and watched the runners going through in the Half Marathon. The route starts in Time Square and loops back around Central Park... maybe next year? We even almost went to Ellis Island, but decided instead to do a bit of shopping in the Village. 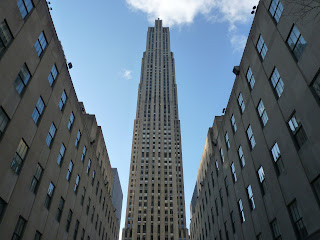 30 Rock
As an unexpected bonus, on our last morning we stumbled across Alec Baldwin, Tina Fey, Tracy Morgan and the rest of the cast filming 30 Rock in Central Park.  The production crew had gone to the trouble of piling snow around the park, so it was perhaps a little ironic that it snowed for real the very next day....  I also got to hang out with Chris Lowell, a friend of Jane's, although to be honest his celebrity is completely wasted on me as I've never watched Private Practice.  Marissa does though, and was a little taken aback when the guy we were waiting for turned out to be a guy in a show she watches.  He was nice, for what it's worth. 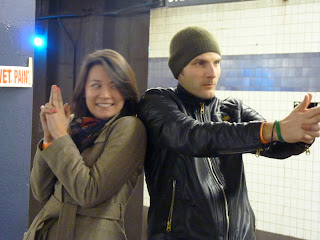 Dempsey & Makepeace: Reloaded
It was all very relaxed. 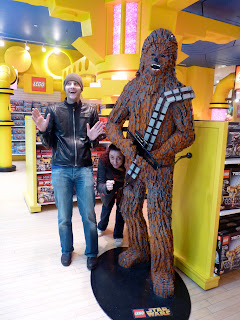 Jazz hands panic before the lego wookiee at FAO Schwartz
I've never fancied living in London, but New York I reckon I could do. It's a cool city and I have some very cool friends who live there.