the sadness will never go.... 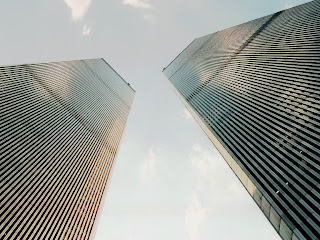 We were in Madrid in September 2001 when we heard that the World Trade Center had been hit.  We were in a bar near the Bernabeu stadium as we killed time before catching the night train to Barcelona.  The plan had been to watch a bit of the build-up to the Real Madrid game against Roma in the European cup, but obviously there was only one thing on the television that afternoon.  Amazingly, Real Madrid played that night, and we watched a bit of the game in the waiting room at the train station, but it was both horrific and surreal watching as the jumpers started to throw themselves out of the windows of the towers as the fires burned.

I first visited New York in the Spring of 2004.  I was working, so didn't have much time to explore the city, but the absence of those towers was still very keenly felt in the city.  When I visited again in 2008, I had a bit more time, but C. and I consciously decided that we weren't going to make the trip down to Ground Zero.  I was curious, of course, but it felt somehow prurient to make a special trip there. 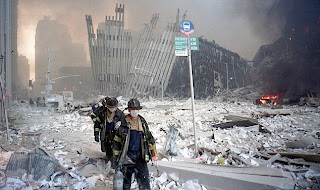 This time, nine-and-a-half years after the attack, we went.

Our friend Marissa works in a school nearby, and last Friday we went down there to pick her up and she wanted to go to Ground Zero, so we went.

It's a construction site now, with things slowly returning to normal and the new tower already rising 30 or so storeys into the sky.  There were lots of people there, of course: many simply passing through on their way back up towards Midtown from the financial district.  There were also lots of tourists.  Is it just me, or is it still a bit weird to see people posing for photos against the new building with their thumbs up?  Too soon?  Will it ever be appropriate at a place where 2,606 people lost their lives in such an appalling way?

As well as being a building site, this is also a shrine.  The new building will incorporate two memorial pools, but there is still plenty of other stuff around the place.  The church of St Peters faces the new building and was a refuge in the immediate aftermath of the attacks for survivors, rescue workers and volunteers.  You can still see the scars on the church pews where exhausted rescuers lay down for some rest with their equipment belts still on, and there's an altar there with messages from the families of the victims, some whose remains have never been found.  It's intensely moving..... and yet there's also something uncomfortable in the atmosphere.  It's full of tourists taking pictures, which doesn't help, but there's something else too.  For want of a better word, I'm going to call it grief porn.  It's not that they're wallowing in the tragedy and the deaths, particularly; there's just a distinct lack of humility about the place.... odd in a church, I thought.

For me, the reality of the tragedy and the sacrifices that lots of rescue workers and ordinary people made, is enough.  How can you fail to be moved when you read about workers coming into the church for a meal and a rest with smouldering boots and then heading back out to the pit for another shift?  The volunteers who thronged to the church to provide these workers with food, care and comfort were clearly doing a good thing.... but boy, don't they want to tell you about what an amazing thing they did.  Do I need to read a volunteer reporting, second-hand, how rescue workers used to say to them all the time that they would come to the church, covered in blood, and receive a hug? The solidarity showed by emergency forces across the world for their colleagues in New York when they sent in their badges was a nice gesture.  Do I need to see the cassock that someone made out of them and wore to carry out services for the volunteers?  Casualties included the citizens of more than 50 countries, so do I really need to see the names of the survivors on a poster made up to look like the American flag?  No.  Nearly 90% of the deaths were American nationals, and the attack took place on US soil, but it wasn't called the World Trade Center for nothing. 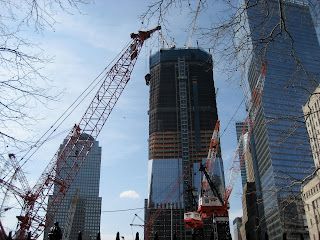 New York is a fantastic city, and ten years after the 9/11 attacks, the wounds are still fresh and the cabs still have stickers calling for "No Mosque at Ground Zero".

For all my mixed emotions about what we saw, I'm glad we went.  It was very moving....but I don't think I'll be going back until the new building is finished and the scars are a little more healed.  The physical ones in the ground, anyway.
Posted by swisslet at 20:04