So, on Tuesday we were in New York, stalking watching Alec Baldwin, Tina Fey and Tracy Morgan as they filmed 30 Rock in Central Park. 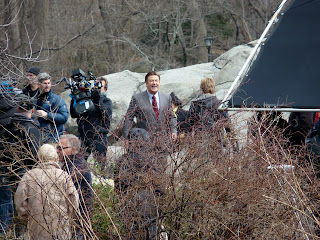 Alec Baldwin, shortly before he announced to the whole crew that "She licked his hand!"
Today... well today was my first day back at work.  I was hoping to just keep my head down and get through unnoticed, but my boss wandered over to my desk at about 08:30.

"Do you want to meet David Cameron and Nick Clegg?"
"Um.  In what context?"
"They're visiting today and I wanted to know if you wanted to meet them."

I have no idea why he chose me.  I thought I was perceived as being a bit difficult, but it turns out that they think I'm presentable enough to be wheeled out in front of the Prime Minister and Deputy Prime Minster. 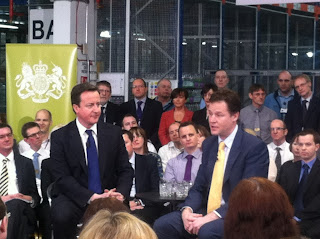 They even put me right in camera shot, just in front of the Royal crest.  I've been on the news and everything, apparently (I am on the BBC website!  Look!  I is proper FAMOUS! UPDATE - they've changed the camera angle on the bbc now, but I was in the Evening Post.... just about.  Still famous!).

It was an open question and answer session, and I suppose I could have asked anything.  The questions were disappointingly (but predictably) tepid: the NHS, the budget, Libya and...um, the high speed rail link from London to Nottingham and the improvement of the A453.... stuff like that.  I was itching to ask something a bit more interesting: how they feel about the fact that the company they were sitting in was registered in Switzerland and paid very little UK tax; how Clegg felt as a smoker about the rise in tobacco duties in yesterday's budget; to test Cameron's supposed knowledge of The Smiths; to ask why we were so interested in human rights in Libya when we're so disinterested in similar abuses in places like Zimbabwe (that's an easy one...).... anything but the bland half-volleys that were being dutifully served up by an obedient audience, unwilling or unable to upset an audience made up largely of senior executives.  I reckon even Cameron and Clegg must be bored of sessions like this and might relish a more interesting question.

But I didn't say a word.

Alright, so -- as you can see in the photo above --- I've perhaps been a little distracted by the guy off to one side with the unnaturally black hair styled into an elaborate and bouffant brush-over (he looked both unbearably self-satisfied and entirely ridiculous, but he's apparently one of our senior group executives.  What do I know?).  But I kept my mouth shut throughout.

In my head, I was sticking it to The Man, but externally I was largely composed and only slightly sardonic-looking.

I must be getting all executive in my old age.

Email ThisBlogThis!Share to TwitterShare to FacebookShare to Pinterest
Labels: holidays, my brilliant career