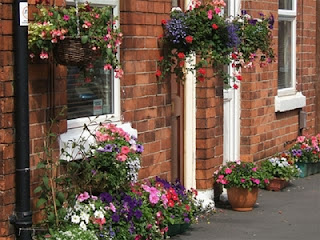 When I left work this evening, I needed to get a bit of a wriggle on if I was going to make it to my appointment with the osteopath on time.  Naturally, because I was in a bit of a rush, my usual route home along the ring road was completely backed up, and when I went the other way, I found that the Embankment had been closed to traffic and I would have to take a detour through the Meadows.

For those of you not familiar with the geography of Nottingham, the Meadows is an inner city area just south of the city centre and alongside the river Trent.  I think it's probably fair to also say that it also has something of a reputation as being one of the less salubrious parts of town.  In common with lots of similar areas in similar towns, the Meadows was originally built at the turn of the century to house the workers from the factories and railways in the city.  The oldest buildings are quite handsome Victorian terraces, but at some point during the 1970s, some genius decided to bulldoze loads of those buildings and to engage in a bit of modern town-planning, sticking up newer buildings in precincts.  If the intention was to spruce the area up, then it didn't work: the newer buildings have aged far less well than their Victorian predecessors, and the precincts and the underpasses around them quickly became no-go areas.

I'd hesitate to call the area a ghetto, but it is one of the poorest areas of the city and apparently has some of the lowest rates of educational attainment in Nottingham.  I used to walk through the central precinct when I worked in the town centre and walked to work in the morning, but I would never walk back through it at night.  It was that kind of a neighbourhood.

Recently, it seems that things are starting to change though, and one of the bonuses of being forced to take a detour to drive through the area is that you get a good look at some of the improvements.  I suppose it doesn't sound like much, but as I rushed through on my way to make my appointment, I really do like to look down some of the streets of old Victorian terraces and see all the flowers.  The locals, it seems, are keen to take back the streets, and you'll often find that every single house has a box of flowers outside, all the way down to the end of the road.  It's a lovely sight, and one for which the residents regularly win awards.  It's nice to see people taking a pride in their neighbourhood.

Email ThisBlogThis!Share to TwitterShare to FacebookShare to Pinterest
Labels: nottingham