...which I forgot when I started to sink 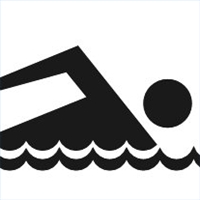 On Friday evening, I had my first swimming lesson in something like thirty years.

I've been sort of meaning to do it for some time. I wouldn't say that I was a keen or particularly talented swimmer, but I do like to have at least two sessions in the pool every week. I do a lot of running, but the muscles that are the most prone to wastage are the ones in my arms and shoulders - ones that running is hardly likely to build up. I do specific exercises with dumbbells and things three mornings a week in an attempt to keep up their strength and condition, but it also feels like a sensible idea to keep up at least one form of exercise that keeps them moving and hopefully keeps them from wasting away.

When in the pool, I tend to hang out in the lanes in the middle: not too fast, not too slow. I'll do 50 lengths, alternating 5 lengths breastroke with 5 lengths crawl. I'll usually be swimming at more or less the same pace as everyone else in the pool, but every so often, you find yourself swimming alongside someone really good: they seem to be going twice as fast as me with half as much effort, and I become actutely aware that my technique rather hauls me through the water. Watching them swim makes me wish that I was a better swimmer. It's not that speed is that much of a concern for me - although a faster swimming leg in any triathlons I might do would be handy - it's just that I find swimming a bit dull, and if I'm going to do it, then I might as well learn how to do it better. So I booked some lessons.

Lucy, my instructor, watched me swimming a few lengths and then proceeded to break down my stroke: I looked good in the water, and (apparently) had a good torpedo shape and a decent flutter kick, but I was reaching too far and was barely applying any power through my arms. We spent the next 20 minutes or so working on my "catch" - how I use my arms in the water to apply power. It feels really weird breaking down something you've been doing for years and trying to do it slightly differently, but by the end of the session, I was really starting to get my head around it: instead of windmilling my arms with a locked elbow, I was now bending my arm and applying the power by pulling hard with my forearm beneath my body before straightening the joint and lifting my arm out of the water. It was a bit of a struggle to get my head around it, but I could feel immediately that I was moving faster in the water and that was very motivational.

I went swimming again on Sunday morning, and spent half an hour trying to apply what I had learnt (wearing flippers, as instructed, so that I was focusing entirely on my arms and not on my legs at all). I used to think that I barely used my legs at all when swimming, and that all my power came from my arm action, but boy, was I wrong. Thirty minutes of using my arms "properly" and I'm feeling muscles in my arms and shoulders that I clearly haven't been using before.

I suppose that's the whole point of the exercise, but...y'know. OW!
Posted by swisslet at 18:42