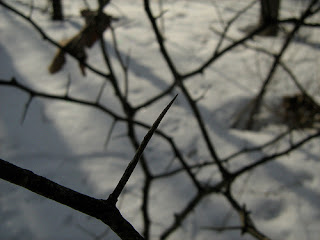 About halfway through a 6 mile run on Saturday, I was running along a canal towpath when I suddenly felt a sharp pain in my left foot. At first I thought I had somehow got a stone in my shoe, and was cursing the need to stop for a few seconds to fish it out. It was one of those days and one of those runs: a run and a swim on Friday afternoon meant that I had precious little energy and the run was already something of a slog with three miles still to go. My pace was steadily slackening off, and about the last thing I needed was to waste a few precious seconds fiddling with my shoe. A quick glance downwards revealed that I had bigger problems than a stone in my shoe: I had a small hawthorn branch attached to my foot and had, in fact, trodden on a thorn (like the one pictured above - ouch).

I stopped and kicked off my shoe. The thorn had, in fact, gone right through the sole of my shoe and buried itself into my foot, just below my middle toe. It didn't actually hurt all that much, and it wasn't bleeding, so I just carefully picked it out and went on my way... grumpy about the fact that my new running shoes now had a hole.

Once I got home, a closer look at my foot revealed that the thorn had actually gone quite deep into my foot. There didn't seem to be any fragments, and there still wasn't any bleeding, but quite a bruise was developing. Ouch. But what about my shoe? Your running shoe is your most crucial piece of gear and I'd gone to some trouble to make sure that I'd got the trainer that was best suited to the way that I ran. How could I be sure that a thorn wouldn't fatally compromise the support of the shoe? I wasn't keen to write off the money I'd spent barely two weeks before, but I would rather buy a new pair of trainers than to potentially do myself a mischief by running with one damaged shoe.

But what could I do? At lunchtime on Sunday, I went to the Brooks UK website, found the "contact us" link and sent them an email:

"Hi - I bought a pair of GTS11s a few weeks ago, and they've been great. Quick question though: I was out running yesterday and managed to stand on a large thorn that went all the way through the sole of the shoe and into the ball of my left foot. I'm basically okay, but was worrying about whether or not this could have compromised the support/cushioning the shoe is giving my foot. Apart from the hole, they look ok, but I don't want to risk hurting myself if something has been damaged and it affects my gait. Have you got any advice?"

To be honest, I wasn't expecting much. It was Sunday, for starters, but what was I expecting them to do? They were hardly going to offer to replace the shoe, were they? Well, nothing ventured, I suppose. If they only gave me peace of mind, then it was worth doing.

A couple of hours after I sent my email, I had a reply:

"Oh dear - glad you were not injured along with the shoe! I have forwarded your query to our Sales Manager who will know the answer to your question. He will be back to you just as soon as he can"

Not too shabby on a Sunday, I thought. As well as trying to get an answer to my question, they actually seemed concerned about my foot. It got better. A couple of hours after that, I received this email:

"Hi Tim. Don't worry, the thorn won't have damaged anything. The midsole material "biomogo" is a solid foam so the splinter won't cause any problems. The GTS11 also features our new cushioning called "DNA" which is also a solid compound so won't be affected. You should get many happy miles out of your shoes still. Enjoy the training"

You've got to admit, that's a pretty speedy turnaround and also a pretty thorough answer..... and it was a Sunday, to boot.  I was impressed.

So, Brooks Sports (Martin and Reina especially): I salute you!

Still no reply from their (US-based) Twitter feed though.... I suppose you can't have everything.
Posted by swisslet at 18:55