I make the fire but I miss the fire fight....

So Wayne Rooney has been banned for two games for his foul-mouthed tirade into a pitchside camera as he completed a hat-trick in Saturday's match against West Ham.  He apparently accepts the charge, but not the ban.  Like all things in football, this seems to have stimulated an enormous amount of debate, with people arguing the toss from every conceivable angle.  Quite why anyone would seem surprised by this, given the form of footballers in general and Rooney in particular, is something of a mystery to me.  Earlier this season, another England international, Ashley Cole, accidentally shot a student with a .22 air rifle at Chelsea's training ground.  He got away unpunished.  These people, it seems, do not have to abide by the same rules and standards as the rest of us.

I'm pretty sure we already had a pretty good idea of this fact, however... so can anyone really say they were genuinely surprised by any of this?  Seems pretty par for the course to me.

I've been reading a biography of Harold Larwood, the great English fast bowler from the 1920s and 30s.  Times, I think it's safe to say, have changed.  Larwood was the son of a miner and spent several years down the pit himself before earning a contract with Nottinghamshire.  His first contract to play cricket was actually for the same money as he earned down the mine, and did not include expenses for kit and travel, but Larwood took it all the same as a way out into the sunlight from the darkness, the sweat and the danger.  He was the son of devout methodists, and he barely even drank when he started playing.... although this soon changed under his Notts captain, Arthur Carr, who was something of a bon-viveur and convinced that a fast bowler could not work without copious amounts of beer to fortify him.  A "Nottingham Sandwich", a fast bowler's lunch during a game, was apparently beer - as many as four pints - and a couple of cigarettes, perhaps accompanied by some cheese.  Did Larwood get into any trouble as a result of this; thrown out of any nightclubs; involved in any fights or caught with antique prostitutes?  No. He went out and took hundreds of wickets. 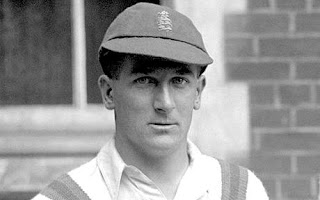 Larwood, incredibly for a fast bowler (even at the time), stood a mere 5'7" and weighed 11 stone, and yet he was one of the fastest bowlers who ever lived... probably comfortably exceeding 100mph, and he was unerringly accurate with it.  A blow from a ball he delivered was said to have an impact of some 2 tonnes, which given that batsmen barely had adequate padding, never mind a helmet, seems a remarkable statistic.  Larwood was uncommonly good, then, but he always made it clear that he only became this good through application and hard, hard work.  He had been down the mines and he knew that if he didn't put his heart and soul into his job as a professional cricketer, then he would be back down the mines in a flash.  He wanted something else from his life and he was prepared to work for it.  He also apparently never forgot where he had come from, and tried never to do anything that would make his family or his friends or his former colleagues down the mine ashamed of him.  He was a real hero.

Harold Larwood is, of course, infamous for his role in the 1932/33 Bodyline Ashes series, when "Leg Theory" bowling designed to curb the runmaking of Don Bradman threatened to bring down the entire British Empire.  It seems almost incredible now, less than a century later, that this could be true, but it really happened.  Imagine what those guys would have made of Wayne Rooney or Ashley Cole.  Larwood was made the sacrificial lamb for the Bodyline series, and as well as bowling himself into the ground during the series (at the end of a day's play, Larwood would ring blood out his socks and the soles of his feet turned black - he was never the same player again), he was never picked for England again and eventually emigrated to Australia.  Shamefully, he never really received his due and was shunned by the English cricketing community as a punishment for something that was not even against the laws of the game.  He was amongst the very best players this country has ever produced, and yet got almost nothing for his efforts.

Rooney may or may not turn out to be a great player yet, but it seems unlikely that he will go to his grave ungarlanded and counting the pennies.  If he has any humility, it is well hidden.

We had a better class of hero in them days, son.
Posted by swisslet at 19:38