it fades to the distance... 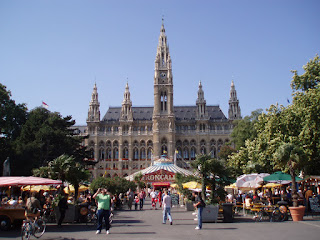 the registry office where we got hitched.  Not bad, huh?
Now that the weather looks to be picking up a bit, it seems almost a shame to report that we're about to pack up and head out to Austria for a few days.

But given that Vienna has some of the finest cake in the world, is close enough to Bavaria to have a decent beer culture, should be hotter and nicer than it is here and (above all) is home to some of our very best friends in the world..... it's not going to be all that much of a wrench to spend Easter away from Nottingham.

We've loaded up on salt & vinegar crisps and cosmetics (for Susie), whisky (for Clemens), shortbread biscuits (for Susie senior), comic books (for Pauli), a set of London Underground expresso cups (for Peter), assorted Jack Wills bits and pieces (for Lilli)... and we're just about ready to go. We're not planning to do much whilst we're there, apart from catch up with our friends, relax and try to unwind. I'm about 30 pages into "The Game of Thrones", 800 pages long and the first in a set of (so far) 5 books... so I should have plenty of reading to be getting along with.

Exactly twelve months ago, we were supposed to be returning home from San Francisco after a trip of a little over three months that saw us taking in Hong Kong, Australia and New Zealand before heading home via a short stop on the west coast of America. Eyjafjallajokull had other plans for us, and the ash cloud kept us grounded in San Francisco for a couple more days yet. In the end we made it home okay, in plenty of time for our departure to Cape Town and a three week trip through Namibia, Botswana and Zambia. Of all the travelling we did in 2010, that was probably my favourite trip, and the one where we made some brilliant friends. We'll actually be catching up with Monica from that trip whilst we're in Vienna, which will be great.... we'll be able to have a good natter with her about the trip we've just booked to go to Kenya and Tanzania in September this year.

It's funny: I've been back at work now for nearly 9 months, and although it's been hard work, it's been very soothing to look back on what we did in 2010. Far from being a source of stress that I'm stuck in an office when I was roaming around the world last year, it's actually been a great source of comfort. We had an amazing 2010, and now I've got another fantastic trip in the diary to look forward to.

Have a great break everyone, and see you on the other side for some apoplectic ranting about the forthcoming royal nuptials.....
Posted by swisslet at 20:44