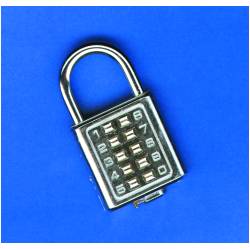 I've got a padlock just like this one.  I've had it for more than five years and use it exclusively for securing my locker when I go to the gym.  In all that time, I have never once changed the combination.  In fact, I don't even know the numbers that make up the combination - instead I have long since committed to memory the configuration the buttons need to be in if the lock is to spring open when you slide the catch at the bottom.

Except on Friday evening, I forgot.

I'd just been swimming for 45 minutes or so, and had a sauna and a quick shower before returning to my locker.  I reached for my padlock, and my mind went completely blank.  I didn't panic at first, because I most often open it up without even consciously thinking about it.  I pressed a shape into the buttons, and it didn't open.  I tried another.  It didn't open.  After 30 seconds of this, I was starting to worry.   I was wearing a towel and a pair of flip-flops and I was carrying my swimming trunks.  This was hardly ideal clothing to go and find someone to help me with my locker.

I paused for a moment, took a deep breath and tried again.

This time, the locker opened.

I probably shouldn't spend a great deal of time thinking about this, and I should probably put it down as "one of those things".  Being an analytical sort, obviously I haven't been able to stop myself from picking the incident apart.  To my mind, there are only two possible conclusions:

1) I was having a "senior moment".  I'm 37 years old, and these are only going to happen to me more and more often as I slide into decreptitude.

2) I was experiencing a cognitive difficulty that could be associated with my MS.  I've spoken about this before, and indeed actually ended up being assessed by a neuropsychologist to sit some tests to act as a baseline on my mental performance.  Losing my marbles is one of my greatest fears, and it was the fact that I had started to forget little things - like the names of some people I knew at work - that caused me to mention it to my MS nurses in the first place.  Perhaps forgetting -- albeit temporarily -- the code to my padlock was another example of that?  That was my first thought as I stood in front of that locker, I have to admit, and it scared me half to death.

Neither MS or the onset of senility is particularly enticing, to be honest, but whereas the one happens to everyone, to some extent or other, the other would be a reason to really hate MS.

....or it could simply be a moment's absent-mindedness and I shouldn't pay it a moment's thought.

Anyway, I remembered the code in the end.  That has to count for something, right?

Email ThisBlogThis!Share to TwitterShare to FacebookShare to Pinterest
Labels: crazy in the coconut, WTs