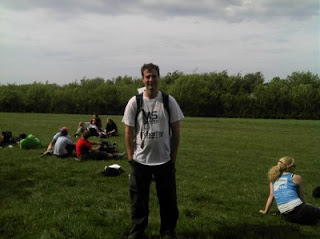 Congratulations are due to my little brother, who completed a 40km hike across the South Downs on Saturday to raise £1,087 (so far! you can still sponsor him on that link....) for MS Research.

You might remember that he did something similar about 12 months ago, when he walked Offa's Dyke to raise money for the MS Society.

What happened next was a cruel irony: as he says himself:

"Back in April 2011, I walked Offa's Dyke (a 177 mile National Trail) in aid of MS Society after a family member, after several years of symptoms, was diagnosed with MS. During the challenge, as I talked to people about the condition, it moved me just how many people's lives have been affected by MS. Since completing that challenge, I began to experience symptoms, and was diagnosed with Relapsing Remitting MS in December 2010".

So, raise money for an MS charity...develop the symptoms of MS.  Life's a kicker, isn't it?  I sometimes describe any fundraising I do for the MS Society as "my self-interest charity", and I guess my brother is now in the same boat.  Still, with the current Government of the UK looking to make slashing cuts to the National Health Service, including a likely cut to the funding of the MS Nurses, these charities need the money more than ever before.

My brother has just started injecting himself -- today! --with the same beta-interferon 1a that I've been using now for the last couple of years.  I hope he reacts to it as well as I have, but it can definitely be a little overwhelming at the start when you receive all of that equipment and are faced with the prospect of stabbing yourself in the leg with a needle that's about two inches long every single week for the indefinite future.

"Apparently I am not the first idiot to lock my sharps bin within 5 minutes of receiving it!"

Um.... no, definitely not the first idiot to do that.  Ahem.  In my defence, how are you supposed to know that pushing the bit that says "push" down will lead to final closure?  They don't tell you that kind of stuff.  Of course, it takes a special kind of idiot to do the same thing several times, but I was at least able to offer the advice that they're usually possible to re-open with a bit of patience and a pair of kitchen scissors....

Well done.  Pretty good effort all round, I reckon.  On behalf of our people, I thank you! I may be shaking the virtual collecting tin myself over the next few months as I'm thinking of doing the Nottingham half marathon again in September.  Steel yourselves.  You have been warned.
Posted by swisslet at 18:35