But weeds are for hoeing....

Theme to the Muppet Show

Well, we open up with a real classic.  I can't recall now if it was me humming this out loud at my desk that started the conversation about the Muppets, or if it was the conversation that prompted the earworm.  It doesn't really matter.  Whichever way round it was, we ended up trying to place people in our team to characters in the Muppets.  Guess who I ended up with: 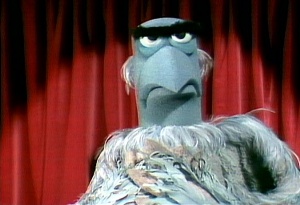 On balance, I think I'm going to take the positives out of that.  My boss has already decided that I'm a lookey-likey for a different blue character: 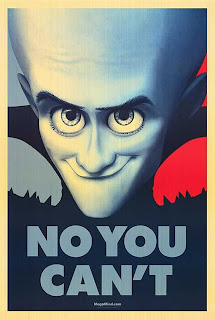 ... so much so, that he has a picture of this pinned up next to his desk.  Well, as I think he looks like William Shatner (now - and my boss is probably about half Shatner's age), I suppose we're probably even.  I told him it's in the hair: they must go to the same shop for it.

Yes, incredibly annoying now, isn't it?  I just try and cast my mind back to that scene from the beginning of the second series of Phoenix Nights when Max and Paddy were singing along lustily to this whilst in the front of the van....only for the camera to pull out and for us to realise that they were ferrying the Islamic Elders around town.  Best not think about it's afterlife, eh?  Persistent earworm, this one.

As you know, I don't really like Abba.  When I caught myself singing this to myself as I was sat at my desk, I had to stop and think for a minute to work out who this song was by.  Then I realised.  Then I stopped singing it.

....although unfortunately for me, my brain then took the logical step into this song.  I'm not a fan of it, on the whole: it makes the atheist in me nervous, for one thing, but it's also just silly.  So what if God was on the bus trying to make his way home?  If you can get to heaven on a bus though, I wonder what route it is.... if only it was that easy, eh?  Exact change only, do you think?  It's catchy enough, but I was pleased to move onto something else.  Actually, on reflection, I quite like this song.  Damnit.  Although, isn't God unknowable?  Isn't that the point?  Am I overthinking this?  Again...

...until the something else turned out to be this.  I was having a pretty productive 5 minutes, from the earworming point of view, if not from the "doing some work" point of view.  This song, of course, is to be sung with your arms outstretched in an imaginary cornfield and into an imaginary camera in the sky.  I did this.  At my desk.  Until I got told to stop.

“Return of the Mack” – Mark Morrison

... at which point I moved onto this.  Ridiculous.  Both the song and this terrible run of earworms.  Mark Morrison.  From Leicester.  Best number one single ever?  Return from what, by the way?  Wasn't this his debut?  The R Kelly of the East Midlands?  Is that the mental link?

On the recommendation of Steve Nixon, I decided to check out "Rome" by Danger Mouse.  Very good it is too, albeit it is essentially a homage to the soundtracks of Ennio Morricone.  It's none the worse for that, though.  One listen in, and it sounds pretty good.  This song has stuck in my head courtesy of a typical guest vocal from Jack White, but it's all good.  Thanks for the tip, Steve.

“You’ll Be Mine” - The Pierces

Now, I knew this lot from "Boring", but they've been getting excellent reviews for their new album, and with an amazon voucher burning a hole in my inbox, I decided to give it a go.  Their older stuff is quite folky, but they've clearly been listening to a lot of Fleetwood Mac.  An awful lot of Fleetwood Mac.  That's not a criticism, by the way.... just an observation.  Number one bestselling Kindle author on Amazon, David Belbin, pointed out that they were playing in the Rescue Rooms next week and tickets were still on sale for £10.  Done!  It's a good album, but this song - track 1 - stands out particularly.  Looking forward to the gig very much.

I heard a song on Six Music the other day that sounded very much like the Young Knives.  It was the Young Knives, and it turns out that they've released an album without me noticing.  Luckily that voucher had some spare and I was quickly able to get it downloaded.  It's good.  They are perhaps not quite as quirky as they were when they started, but they've got poppier as they've got older, and unless my ears are deceiving me, it sounds like they've discovered sex somewhere along the way too.  They're a great band.  I last saw them at Glastonbury when they were playing the John Peel stage in the middle of the afternoon.  About halfway through their set, I suddenly realised that the tent was rammed.  Apparently this wasn't due to a sudden mid-career surge in popularity for the Young Knives, but was down to the fact that the very-much-flavour-of-the-moment Ting Tings were on next.  I've never seen the place so busy... I had to fight my way outside to avoid them.  Young Knives: good band.  This is the most Young Knives-y song on the album, but it's none the worse for that.  Such a criminally underrated band.