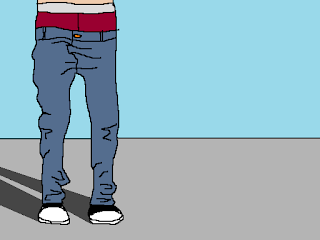 I know I'm getting old, but there are just some things that I cannot understand.  Just walking through the town centre now frequently has me shaking my head in a state of almost permanent mystification.  One recurring cause of this confusion is the fashion sense of the youth of today.  Flip-flops in winter; beanies in summer; shorts that are so short that the pocket lining hangs out; baseball caps perched on the very crown of your head; fat people wearing a much thinner person's clothes... yes, there are lots of things that I don't get. My particular bug-bear at the moment, though, are saggy-arsed jeans.  You probably know the ones I mean: the ones that are worn so low slung that they are essentially belted across your thighs, revealing the whole of your backside to the world, forcing you to walk like a penguin.
Apparently this trend originally initiated in gangland America as a tribute to your comrades in prison, where you are not allowed to wear a belt.  Subsequently, I am reliably informed, about ten years ago it was picked up as a look by "the gays".  Now it has become so entirely mainstream that I imagine it's quite hard to buy a pair of jeans in some shops without a saggy arseline.  Is there anything less gangsta than a middle-class student in a cheap, saggy pair of skinny jeans shopping in Sainsburys?
Why do I hate this look so much? I'm genuinely not sure where to start: how about the way that guys are walking along constantly hitching up their trousers to prevent them falling around their ankles? the way that these arse-displying jeans are often coupled with the rattiest, greyest pair of underpants? the fact that they are almost uniformly unflattering and make you look as though you have a filled nappy as you waddle up the street?
And now, apparently, the Fort Worth Transportation Authority in Texas have banned them:  "Pull 'em up or find another ride," reads signs on city buses, put up after passengers were banned from boarding a bus with saggy trousers that expose the person's underwear.
"Riders don't want to see a person dressed like that on a public bus," Joan Hunter, communications manager for The T, told Reuters. "Our customers think it's disrespectful. A lot of different people ride the bus, and many of them told us it's not a good idea to have your pants below your buttocks."
The decision on whether a potential rider's pants are inappropriate is up to the discretion of the bus driver, and on the first day the policy was in place about 50 people were removed for improper trousers (I love the idea of being "removed for improper trousers")
The reaction from other passengers has been uniformly positive.  "Following this rule is actually easier than following any other clothing policy we have," Hunter said. "All you need to do is pull your pants up before you get onto the bus. You don't have to go home and get a shirt or get a pair of shoes. Then, after you get off the bus, you can dress however you want."
Hmm.
I hate saggy-arsed trousers and fail to see the point of them.  But banning people from wearing them?  That's the thin end of the wedge, my friends.  Who exactly is qualified to determine what constitutes an "improper trouser"?  If they're qualified to judge on trousers, then where do they draw the line? Are they merely concerned with your clothing choices, or do they have authority on other matters? I wonder if they've been offering advice to authorities in Barcelona pondering how to enforce their ban on beachwear in the town centre?  (When is a Bermuda short beachwear and when is it just a short, I wonder? What if you're wearing those shorts that are so short the pocket lining is exposed? Is that more or less acceptable than a tanktini? Have they added guidance on these key questions to the curriculum at the Barcelona Police training college?)
As Voltaire probably said, "I disapprove of your saggy-arsed trousers that make it look like you have filled your nappy and force you to walk like a penguin, but I will defend to the death your right to wear them...."
What he said.
....Well, perhaps not to the death. There has to be a limit.
Posted by swisslet at 18:53