the moon is face down in a puddle.... 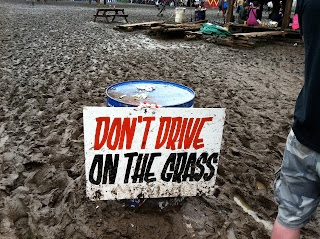 Up at 5am, queue for six hours with a full pack on my bag in the pissing rain and then spending the next few days wading through a sucking bog.... and paying for the privilege.  It could only be Glastonbury, right?  I think this is either my tenth or eleventh, so there must be something that keeps drawing me back to Worthy Farm in Pilton every year.

You'll no doubt be sick to death of hearing about it, so I'll not add more than a few drops to the ocean of media coverage.  Here are a few of the things that stood out for me about the 2011 festival. 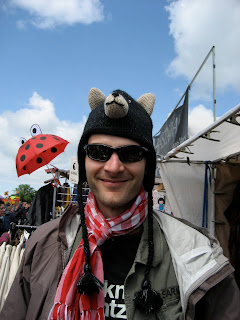 1. Clara’s Pepper Pot, on the corner of the Pyramid Stage and the Cider Bus. Jamaican jerk chicken with rice and peas, served with avocado sauce on the rice and hot chilli sauce on the chicken. Divine. So good that I sent everyone there. C. told them that she was there on my recommendation, and they fed her for free. I reckon she owes me £7. I’ve emailed them to tell them how much I enjoyed it, and they emailed back within half an hour. Properly amazing.

2. Ken’s BBQ, above the Other Stage. Bacon sandwich served on toasted ciabatta with homemade onion marmalade and a dab of garlic mayonnaise. Breakfast of champions. Well, apart from hot organic rum punch, of course.

3. Goan kedgeree, by the side of the West Holts stage. The queue for Infiinite Monkey Cage in the Cabaret tent was far too big to contemplate, so I had this for breakfast instead. Good plan: lemony, spicy deliciousness. 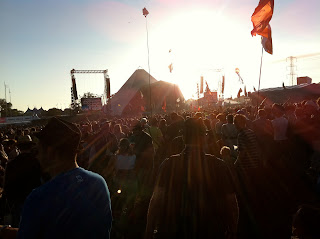 1. St Austell Tribute served from the keg in the Cornish Arms. Fruity, nutty beer. Very, very drinkable. A proper pint of bitter, in a farmer’s field in Somerset. Blissful.

2. Hot rum Punch from the Organic Wine tent in the green fields. Earliest booze licence on the site, and purveyors of a very quaffable strawberry wine. My breakfast choice was the hot rum punch though. Sweet, hot and very alcoholic. Certainly helped take the edge off the weather.

3. Burrow Hill cider from the cider bus. Whether medium (the dry is atomic) or hot and spiced, Glastonbury would not be Glastonbury without spending a fair bit of time here.

4. Wine, served fresh and warm from the goon bag. Mmmm. Spiced rum from a hip flask also made an appearance during the QotSA set. ROCK. 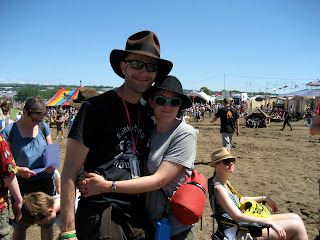 1. Elbow. Saturday evening on the Pyramid. They slayed it. The best Glastonbury moments happen when the band and the audience connect. It happened for Blur in 2009 – still the best set I think I have seen at the festival – and it resolutely failed to happen for U2 and to Coldplay. They both played good sets, but they lacked the alchemy that Guy Garvey conjured in the first 30 seconds of the band’s set. They were amazing, and he had us eating out the palm of his hand with his humility and good humour. The singalongs for “Open Arms for Broken Hearts” and “One Day Like This” actually had me welling up. Beautiful. I missed Pulp for this…. And didn’t regret it for a second.

2. Warpaint Friday afternoon at the Park and Saturday afternoon in the John Peel. These girls are very definitely a rock band, and yet the music that they play is very mellow and perfect late night listening. I was laughing before their first set in the Park at how thorough their sound guy was, apparently loving his moment in the limelight before the band came on…. But when they did come on, they sounded AMAZING, so perhaps he was onto something. They played to a much bigger crowd in the John Peel the following day, and boy did they deserve it. A crowd, I might add, that mostly left before the Horrors came on. They were wiser than me, clearly.

3. Queens of the Stone Age. Sunday night on the Other Stage. Everyone has been raving about Beyonce’s set, but there was never any question where I was going to be. Josh Homme was saying how surprised he was to be asked to headline, as the band aren’t plugging an album at the moment. He wondered what they were going to do, and came up with the idea of asking the fans to vote for the songs they wanted to hear. We did, and so the band opened up with “Feel Good Hit of the Summer” and “Lost Art of Keeping a Secret” and the pace rarely dropped from there. They even played “You Think I Ain’t Worth a Dime, But I Feel Like a Millionaire”. For me, they peaked when they played “First It Giveth” (my vote, FWIW). “Go With The Flow” and “No One Knows”, but they were epic throughout. A saga.

Honourable mention: Morrissey. He was very self-deprecating about everyone waiting for U2, but he opened with “I Want the One I Can’t Have” and went straight into “First of the Gang to Die” and I was sold. “This Charming Man” works better with Johnny Marr and not Red Hot Chilli Pepper guitar, mind.  Eels were great too.... when Mark Everett looks like he's having fun, you know it must be going well.  And he played a thrash version of "Birds", too. 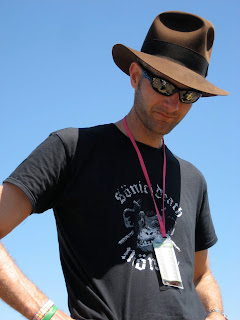 1. Elbow – “Open Arms for Broken Hearts”. They might have had a bigger ‘moment’ with “One Day Like This”, but for me it was the synchronicity of singing this to a mud swamped festival in a field. I was singing like a lunatic with the tears flooding my eyes like a big, happy baby.

2. U2 – “Beautiful Day”. It wasn’t a perfect set, although the link to the International Space Station was pretty good. Bono mainly resisted the temptation to preach and the Edge was magnificent. They’ve got some tunes though, eh? My favourite moment was when they played this song. This was used to great effect as a soundtrack to a lovely video put together for World MS day a couple of years ago, and watching the band play it inevitably brought that to mind, and for the first time, I really caught the lyric “It’s a beautiful day, don’t let it get away” and the tears came running down my face, catching me a little by surprise. Not tears of self-pity, I think, but tears nonetheless.

3. Biffy Clyro – “Mountains”. I was only there to get into position for Moz, but caught this and it was EPIC. I was singing it for days. Great song. Big crowd, too.

“No One Knows” by QOTSA. Loud.
“American Pie” by Don McClean. Long.
“You Can Call me Al” by Paul Simon. Legend.
"Undertow" by Warpaint.  Languid. 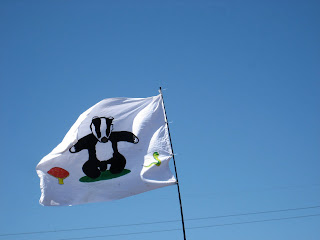 Best thing of all about the festival though?  I know I say this every year, but it's about the quality time I get to spend with my friends.  We don't even particularly need to go to watch the same bands or spend all that much time together, but there's something about sharing a campsite and sharing cheap wine that really makes it feel like quality time.  Breakfast is a great time, as we all emerge slowly from our tents and have a natter over a cup of tea or coffee.  My favourite day is probably the Thursday, when we're all in and settled but don't have to race off anywhere to go and see any bands.  I love it.... even if I rarely make it much past midnight and in all that time have never yet seen the sun come up over the stone circle.  Maybe I'll just leave that to the kids, if they've got time from putting on full makeup, pissing in the hedges, hoovering up drugs and generally making a mess.  They're the future, you know.

Man, I'm getting old... as I was reminded when I looked in a mirror after six days without a shave and saw a load of grey stubble.  Mind you, one of the great things about Glastonbury is the wide age range of the people who go - from babes in arms to toothless old ravers.  There's a festival here for everyone. 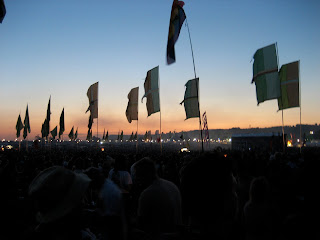 What the hell am I going to do next year?

Email ThisBlogThis!Share to TwitterShare to FacebookShare to Pinterest
Labels: glasto 2011