What’s your view on shouting into the void? You know, ranting on a topic where the ranting itself is likely to change nothing…. I do it quite a lot, and I’m inclined to believe that it’s a little bit like primal scream therapy: better out than in. I’m often accused – especially at work - of being pointlessly angry about things that I can’t control and would be better off just letting go. Maybe so, but I prefer to think of my little rants as acting like a pressure valve and allowing all of that negative emotion to harmlessly exit the body rather than getting stuck inside, building up like a pressure cooker. For me it’s simple: articulating frustration helps me get rid of that frustration.

Yeah, I’m about to have a rant. I bet you never saw that coming…..

I was driving in the Peak District yesterday. We have some Swiss friends staying, and we took the day off work so that we could take them out for a walk in some beautiful English countryside. Rolling hills, dry stone walls, flowering meadows…. The Peak District is lovely, and it was great to see it through the eyes of some appreciative tourists. What I was less impressed by were my fellow road-users. Once we’d left Ashbourne, the roads narrow significantly, and it’s often necessary to slow down at passing points to allow traffic coming the other way to get through on a track that’s not wide enough for two cars. It’s not a system that I would have thought it very difficult to understand, but I kept found myself being pushed into the edge of the road by people pushing their way through without apparently caring what was in front of them on the road.

…then I got stuck behind some OAP’s driving at about 15mph in huge 4x4s, braking erratically at the approach to every corner. I followed them until the stopped, suddenly, over a junction without any indication and showed no signs of moving. I took another deep breath, drove around them and carried on with my day. Then at Dovedale, I crossed a small stone bridge and found myself facing off against a large coach full of pensioners. The driver glared at me, so I pulled as far as I could into the side of the road. The driver gesticulated at me angrily. He didn’t think he could get past. I looked behind me: another car had crossed the bridge and was sat directly behind me. I looked back and saw that the coach driver was indicating that I should turn around in the narrow lane to allow him to pass. I didn’t see what other option I had, and so did a 10-point turn – lucky I wasn’t in a car bigger than my Mini --and pulled into the hedge on the other side of the bridge. The bus pulled past with the driver scowling out of his windscreen and without a single gesture of thanks at my manoeuvre. I failed to see what I had done to deliberately inconvenience him, but pulled back out, turned around and crossed the bridge to carry on my way.

You know what? Not 15m behind where we had faced off was a coach layby. The miserable bastard could easily have backed up and let me past, but chose to be a dick instead. Grr.

For the record, we had a lovely walk around Thor’s Cave and my Swiss friends were enchanted by the lovely countryside we walked through. We stopped in a country pub on the way home for a proper pint of beer and everything was fine... 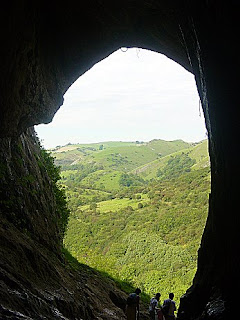 But seriously, what happened to simple manners and the concept of driving with a bit of consideration for others?

Oooh. I feel better for that.  Just don't get me started on people who don't indicate on roundabouts....