the wind beneath my wings....

I've likely mentioned it before, but we've got a big change initiative underway at work at the moment. You know, one of those things that most large organisations go through every couple of years.... we shuffle the furniture around a bit and then more or less carry on doing things the way we've always done them.  It's called "Breakthrough" (you may remember that I went to an away day where the slogan was the grammatically eccentric "Breakthrough by doing different").

I'm instinctively cynical about such things, obviously.... but I'm not the kind of person who can just shrug my shoulders and let it slide by until it goes away and the next one come along.  If you're going to try and change something, then you might as well try and change it for the better, right?  Almost accidentally, I ended up being quite involved and -- together with a close colleague of mine -- we change the way that my bit of the department works.

I remain sceptical of many things associated with Breakthrough, and I'm not convinced that the initiatives are being coordinated terribly well or that we even have a particularly good grasp of what the problem is that we're hoping to solve..... but it's not all bad.

Well, that's what I thought, anyway.

I took the day off on Tuesday to spend some time with our Swiss friends who are visiting.  When I came back into the office on Wednesday, I saw that Breakthrough had been busy on a postering campaign, and the rest of my team were waiting with bated breath to see what my reaction would be. 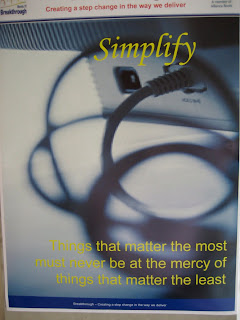 I find some quotations very inspiring.  A great example of this is Gandhi's "Be the change you want to see in the world".  I like that quote because it is direct, personal and a simple call to action.  That quote about simplicity is none of those things; instead it is indirect, impersonal and mildly confusing.  It doesn't even have a particularly inspirational picture.  Isn't that how these motivational posters are supposed to work?  Nice picture, vacuous quote?

The posters get better and better. 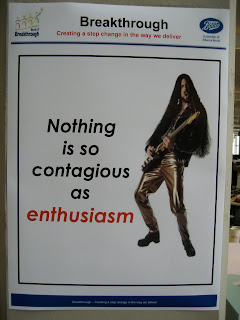 Um.  Gonorrhea? The common cold?  Bubonic plague?  And what's with the rocker, anyway? 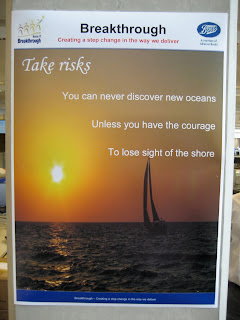 Well, now this is more like it: that beautiful image of a sailing boat heading towards the sunset on a beautiful clear ocean.  Who could fail to be inspired by that?  So what if Prince Henry the Navigator discovered most of Africa by sailing down the coastline from Portugal, rendering the quote somewhat absurd?  Who cares if I'm struggling to see the relevance of shorelines and the discovery of new oceans to the day-to-day work of a large IT department.  It's a masterpiece and I'm pleased to have it stuck on a concrete pillar near my desk, brightening my day and putting a spring in my step. 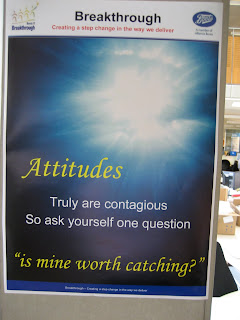 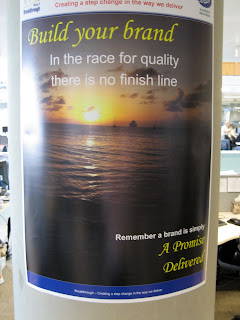 Two perfect quotes on one poster.  Let's admire them again:

"In the race for quality there is no finish line". (I wonder if this is "Zen and the Art of Motorcycle Maintenance" quality we're talking about here, and if we've entered an entirely new level of philosophical thinking?).

"Remember that a brand is simply a promise delivered".  (Hmm.  Is it though, really?)

Inspired by this exhibition of amazing inspiration, I was prompted to put up a couple of posters of my own.  Entirely coincidentally, whilst I was at home on Tuesday, a calender I ordered some time ago arrived in the post.  I blew up a couple of the images and pinned them up near my desk. 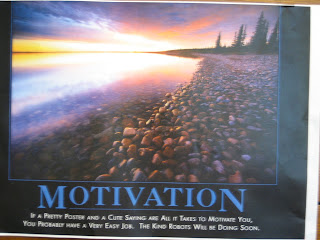 Motivation: If a pretty picture and a cute saying are all it takes to motivate you, you probably have a very easy job.  The kind robots will be doing soon. 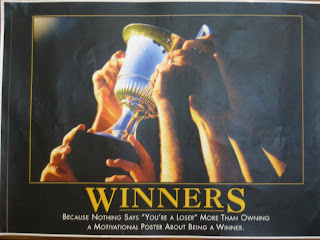 Winners:  Because nothing says "You're a loser" more than owning a motivational poster about being a winner.

They've been up all day, and so far they're still there and no one has made any attempt to move them.  One of my colleagues came up to me anxiously this afternoon.
"Did you put those up?"
"Why do you ask?"
"I think you might get into trouble"
"Why?"
"Because you're openly mocking the people who put those other posters up"
"Am I?"
"Yes, you're saying that those posters are stupid and they must be idiots for putting them up and thinking that anyone would be inspired by them."
"......."

Am I worried about what people might think of me for putting up those posters?  Not really.  I reckon my credit is pretty good at the moment. 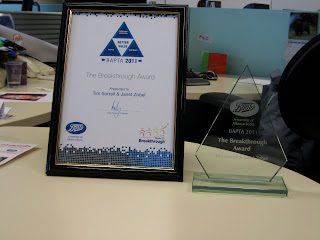 Last night I attended a gala awards dinner for my department and I won (together with my colleague) an award.  Not just any award: the Breakthrough award.  An award for my contribution towards trying to change the way that our department works and to make us better and more efficient at doing what we do.  Did I achieve this through the use of inspiring images and quotes?  No, I did this through hard work and careful thought about how we could improve what we do so that we are better and more consistent at delivering to the business.

Changing the culture and working habits of a department like ours is hard and is also probably necessary.  Does anyone seriously think that trite quotations like these are really going to inspire people to make a difference? People read me wrong all the time and assume that I'm just sneering at these posters.  Well, I am sneering a bit, I suppose... but contrary to appearances, I also care what happens to my department and have been trying hard to make a difference.

How are posters like these helping to make a difference?

I find them funny at best and insulting at worst.  Inspiring they definitely are not.  The day we can't see them for what they are and give them the reaction they deserve will be the day we might as well give up and go home.