I don't really understand how my body works.  Not in the medical sense, you understand... the more exposure I've had to the wonders of medical science in the last few years, the more I'm realising how little anybody knows; I've seen some amazing high definition images of my own brain, and not only did I not have a clue what I was looking at, but it's fascinating how little some of the most eminent neurologists in the country were able to deduce from these amazing pictures too.   When I was diagnosed with MS and fell into the capable hands of the NHS, I was told to listen to my body and to look out for patterns that would give a clue about what made me feel worse so that I could avoid it.

A common example is heat: lots of people with MS find that their symptoms flare up as the temperature rises.  You can buy special vests that help you keep your core body temperature down.  Heat doesn't really seem to bother me though, but I seem to struggle when I get cold and football in the winter is a nightmare as I lose sensation in my arms from the shoulders down.... but I don't have any problems when I go skiing in much colder temperatures.  None at all.  Go figure.

I just can't spot patterns in my symptoms.  I know I'm supposed to be careful with my training too, making sure that I don't work myself too hard.... not forgetting that I first developed symptoms when I was training for the London Triathlon back in 2005, and just maybe it was all the extra exertion that brought on the attack.  I do try to be careful and to listen to what my body tells me, but the truth is that I flog myself, as if conquering my MS was a simple question of mind over matter.  Some days I'm more tired than others; some days I can hardly feel my feet; some days I can't feel my thigh muscles; some days my cheek goes numb or I can hardly lift my arms above my head.  None of it really seems to stop me, but I have no idea why some days are worse than others.

When I woke up this morning, I was feeling my symptoms more heavily than usual.  To be honest, I wasn't too surprised: I'd injected on Tuesday, so it probably wasn't anything to do with that, but I had been out at the pub quiz on Wednesday night and had a few pints and a late-ish night.  I have no idea why, but a combination of those two things sometimes causes my symptoms to flare (although never yet at Glastonbury, I'm relieved to say).  I felt basically okay though, so apart from having a couple of ibuprofen and one of my amantadine pep pills, I just got on with my day... as if I have any other choice anyway.

It was football tonight, and as I've said here many times before, this is one exercise that I find the hardest.  There's something about the stop/start, up/down nature of 5-a-side football that I find so much harder than the relentless plod of a run.  You only have to motivate yourself to get started once when you're out running, and then it's a case of having the will power to keep going.  In football, you have to motivate yourself to go up and down the pitch all the time, and somehow that's much more problematic for me.  Tonight I was playing on a team of 4 against a team of 5.  We played for 80 minutes, and I barely stopped running... up and down, up and down.  I felt good and chased around after the ball for most of the game, really working hard to cover back when we lost the ball.  I've no idea why I didn't feel exhausted or find the running difficult, but I was more than happy to roll with it.

.... now all I need to do is to learn not to panic when in possession of the ball, to improve my first touch, to shoot more often and more accurately and to stop needlessly giving the ball away, and I might actually be of some bloody use on a football pitch.

One step at a time though, eh? 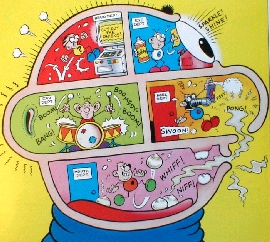 Stupid body.  Maybe the numbskulls are asleep at the wheel?
Posted by swisslet at 20:13