we ain't over but the writing's on the wall....

Forgive me for lowering the tone, but I'm going to talk about toilets.

I've talked about them here several times before, so you could probably argue that I'm not lowering the tone very far.... but I'd like to think that there are perhaps one or two deluded people who stumble here occasionally expecting some high-brow discussion of thought-provoking subject matter.  Well, if you are one of those people, then consider this fair warning that the conversational tone may not be all that you were hoping for.

I'll be honest: the toilets at work aren't all I'd hope they might be.  I don't ask for much really; I don't require perfumes or bidets or anything like that.... I simply require them to be clean and functional.  To be fair, they do get cleaned twice a day and the cleaners are all really, really nice.  It just that...well.... how can I put this?  Some of my fellow users are perhaps not as considerate as they might be.

I've spoken before about how people seem to inexplicably wipe the contents of their noses onto the wall as they stand at the urinal.  Well, that's not really so much of a problem at my local toilets.  Instead, we have a very particular issue.  A cultural issue.

Like many other companies, we work in partnership with lots of offshore companies - in our case, mainly in India.  As part of the deal and to help things run more smoothly, we have quite a large number of representatives from offshore working onshore in our offices.  I was frequently baffled by the presence of drinking cups in the toilet cubicles.  We have water coolers in the hubs near a sink, hot-water machine and fridge, but I couldn't really understand why anyone would feel the need to take a cup into the toilet with them.  They never seemed to finish their drinks either, and half-empty cups of water were forever being kicked over, leading to flooding in the cubicles.

I'm sure you can agree: no one needs that.

....and then it dawned on me.  Apparently, lots of Indian guys don't use toilet paper.  Instead, they will take a cup of water into the cubicle with them to clean up after themselves.

Now that's all well and good.  It's a cultural thing.  Fine.  I get it.  What I don't really understand is why they have to leave their half-empty cups in the toilets when they're done.  A cup of clean water being kicked over is one thing, but a cup of water that has been dipped into as part of a clean-up operation?  Yuck.  No thanks.  Pour it away when you flush and remove the empty cup as you leave.  Wouldn't that be the polite thing to do?

There's more -- although to be fair this isn't necessarily a cultural thing.  Some graffiti has appeared in trap four.  Graffiti in a shared toilet isn't all that unusual, although I can't recall seeing any in the toilets at work before..... that's a bit odd by itself, but even stranger is the graffiti itself: 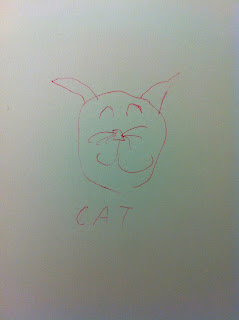 A cartoony scribble, in red pen, of an animal with the word "CAT" written underneath.  It looks a lot more like a dog than a cat, I'm sure you'll agree, so the artist has wisely taken the precaution of removing all ambiguity from the interpretation of what they've drawn.

The location is weird too: I could just about imagine someone having a doodle as they went about their business, but this sketch is located at about my eye-level (which must be nearly six feet off the ground) and just to the right of the door, well away from the business-end of the cubicle.  This hasn't been done idly to pass the time, this has been drawn deliberately by someone before they left the cubicle.

Why would you do that?  What does it mean?  Does this happen everywhere? As graffiti goes, it's hardly a Banksy, is it?  If you haven't got any amazing artistic talent or insight into life or someone's phone number at the very least, why would you bother?

It's all slightly baffling.

...mind you, someone once fell asleep in trap 4 (properly sound asleep - snoring and everything), so who knows what goes through people's minds when they're in there.  Maybe anything is possible?
Posted by swisslet at 18:42