and if it snows, that stretch down south won't ever stand the strain....

I never fail to be amazed by the shameless self-love on display in the changing rooms at the gym. The preening that takes place in front of the full-length mirrors; the loving massage of body cream into swollen pectorals; the naked caress of the sliding bars on the scales..... the age of the metrosexual male is truly upon us. Is there any sadder sight, though, than a twenty-something year old standing in front of the massive mirrors, gently teasing his sadly diminishing hairline with heart-breaking tenderness and care?

Anyway, to matters in hand:

"All My Life" - Foo Fighters

This seems to have been following me around this week, popping up whenever I have my iPod on shuffle: in the car, at the office or out running. Maybe it's a Dave Grohl thing: last week I seemed to have "Everlong" cropping up all the time. Even now "Rope" is playing over the gym PA as I sit and write this whilst waiting for C. Could be worse, I supppose.

...speaking of worse. I was playing a Genius playlist last Saturday night as we were having a BBQ. I think it was called "British Invasion" or something, and seemed to have been calculated to consist of British artists who were big in the USA in the 1960s. You know, Dusty, the Kinks, The Beatles.... and apparently Cilla. It popped up twice, for some reason; both times I had to run to the skip button before the shrieking really started. Awful record. Honestly.  Why's it on my iPod?  Bacharach compilation, innit.

I think we had this the other week. Still love it. Apparently the Matt Stone and Trey Parker get an enormous kick from knowing the Kim Jong Il is a massive film fan and he has his own private cinema in his palace in Pyong Yang with a collection of thousands of films. It is a tantalising thought that it may be quite likely that the great man has, at some point, sat down and watched "Team America: World Police". I'd love to think he found it funny. I'm not sure that he looks like a man with that kind of a sense of humour though, particularly about himself. Have you seen North Korean propaganda art of their noble leader? You should. It's AMAZING. 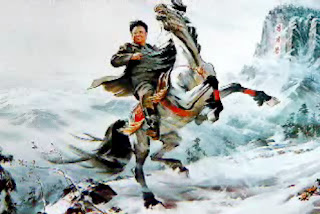 Look!  He's on a horse! In the snow! On a mountain! AWESOME.

Both songs are on my current running playlist, and both are usually most welcome when they pop up on shuffle. Love a bit of old school New Wave of British Heavy Metal. I've also got some even older school Maiden on there too: songs like "The Prowler" and "The Phantom of the Opera" and both sound AMAZING through headphones when you're slogging your way around a long run.

...speaking of running songs. I went out in the pissing rain at lunchtime to get my requisite 4 miles in. My colleague, who usually runs with me at work, turned me down rather gleefully, saying that as she wasn't training for anything, she didn't have to run. Still slightly disappointed by my time for 12 miles the other day, I made a conscious effort to push a bit harder and to keep picking my legs up even as I began to tire. The result was that I ran our usual circuit at an average pace of 7.57 mins / mile and a good 90 seconds faster than we usually run the same route together. I'd gloat, but frankly I'm too tired. I was quite pleased that Lucy had me practicing tumble-turns at swimming tonight. I'm crap at them, but they involve a whole lot less energy than doing lengths. This song came up on my running playlist to sustain me through the last couple of minutes of my run, when I was noticeably slowing down and trying to keep my pace up to clock an average pace under 8 min/miles. It hurt. It's perhaps not as classically up-tempo as something like Iron Maiden, but if I've learned anything about running playlists, it's that it's sometimes quite hard to know what song will give you a lift on any given day. Today it was Billy Bragg.

He's entitled to make a living, I suppose, but I think that stupid cider advert that Plan B at the moment diminishes him as an artist. Maybe I'm being too harsh, but he's endorsing filth with a beautiful song for money. Love this record though.

I was reviewing this album for Leftlion this week. It's only 250 words, but I really like the challenge of listening to something with absolutely no preconceptions about the music and being forced to make up my own mind. Grey Goes Down, I reckon, are a post-punk band influenced by the likes of Green Day and Self Esteem-era Offspring, but I also think that their singer has more than a touch of the guy from Biffy Clyro. This song sounded a bit thin on the files I was sent to review, but when I watched the video online, it sounded a lot better and has some real kick... I bet they're a fantastic live band. The other album I was sent to review was a competely different kettle of fish: "Of Time and Tides" by Nick Jonah Davis turned out to be an absolutely beautiful record of Bert Jansch/Nick Drake-esque acoustic guitar and no vocals. It was lovely, but as a reviewer I felt completely out of my depth. I did some googling and learned a bit about the "American Primitivism" style that NJD apparently plays in, but although I could probably bluff 250 words out of that, I didn't feel like I had the right. Mike argued that I should have a go, as to fail to submit a review was to deprive the artist of the coverage and the reader of a chance to discover something wonderful. Hm. Maybe that's true, but I felt that the artist deserved better than a hack like me putting in a cut and paste job. I have a frame of reference for a band like Grey Goes Down, but I felt totally out of my depth with this one and sent it back to the music editor with a note of apology. Do seek him out though - he's fantastic.

I shouldn't be giving these gibbons the airspace here after that unspeakably stone age cover they appeared on for Q magazine. It's like we're still in the 1970s. I'm sure that Q would like you to think that it's 'ironic', but the truth is that it's sadly demeaning to everyone concerned (Kasabian, you suspect, have little idea of what the word "irony" even means).

I used to like Q, but eventually stopped reading it a couple of years back when I got tired of the endless, tedious "Top 100" type lists that they published instead of real content. It doesn't look like they've improved. I dislike almost everything about the band, but sadly I have a troubling weak spot for some of their music, and this song in particular. Damn you, ears.

A song of heart-stopping beauty and sadness. Campbell has Alzheimers and is about to embark on his farewell tour at the age of 75. When asked how he was coping, Campbell responded:

"I like to joke and laugh," adds Campbell. "I've cried and I've laughed. Laughing is better."