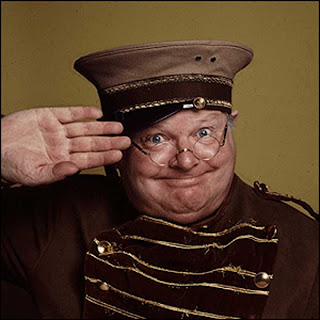 You'll remember the Weapon of the Zombie Apocalypse (WotZA): he's the guy who sits behind me who has, shall we say, very fixed views on everything from beef served rare (no) to sushi (no) to soap operas (no) to work nights out (no).  He's not exactly what you would call open-minded.  Or progressive.  Or in possession of many social skills.

He's quite a large chap, is our WotZA.  For a man so particular about what he eats, he seems to eat an awful lot.  He's one of those people who, lest they appear greedy, is reluctant to be the first person to any cake that is brought into the office.  He is, however, a "first follower", and will stand over the first person to break cover as they cut their slice, tucking in himself almost before they have moved out of the way. Return visits are, shall we say, not uncommon.....  He amused me this week when he butted into a conversation I was having with a colleague about how my wife was getting thoroughly sick of people saying how thin I was and then looking at her accusingly.

"It must be your metabolism.  If anything, you eat more than me...."
Words failed me.  If he really thinks that, then he really is delusional.  More carrots, maybe.

He was out of the office yesterday, but when he came back in today, he told us all a cracking story:  apparently he spent part of his day off sitting on a deckchair on the pier in Cromer.  Lovely, I'm sure you'll agree.  No.  Apparently, as WotZA was sat there, he was pissed on and then pooed on by a dog.

Now, if you're like me, you'll be wondering how on earth that happens without you noticing, nevermind how it happens when you are sat in a deckchair... but happen it did.  Funny enough,  but we're not done with this story yet.  Apparently, the dog owner's attempts to clean up after his dog left a real mess, and WotZA had to brave the shops to try and buy a new t-shirt.

Could he find a XXXL t-shirt anywhere in town?  No he could not.  Apparently, according to WotZA, this means that Norfolk must be populated by midgets.  Presumably he then made the journey home wearing two beach towels stapled together as a tabard, or perhaps wrapped up in a caravan awning.

Needless to say, it took every ounce of self-control to hold myself together as I was regaled with this story.  As WotZA was speaking, all I could think of was of this whole event played out as a Benny Hill sketch, speeded up with a fist-shaking WotZA chasing the dog backwards and forwards around the screen, perhaps disappearing entirely, only to return with their positions reversed and the dog now doing the chasing.

Is it wrong to laugh?  I did.  Repeatedly.