It's been a while since we talked Celestial Teapot, hasn't it?

A little while ago, the New Statesman asked well known figures "Why Do You Believe in God?"

Quantum physicists, biochemists, physicists, biologists, philosophers, astonomers and all sorts queued up to try to explain why they believed in the Almighty.  The idea behind choosing such intellectual figures is obvious: to show that rational, intelligent people believe in God.  At varying lengths, and with variable coherence, they all essentially come down to the same point.  As Cherie Blair puts it:

"It's been a journey from my upbringing to an understanding of something that my head cannot explain but my heart knows to be true".

Essentially:  I choose to believe that God provides the answers that explanations do not.  As Jeremy Vine concludes, "...I still return to believing, as if that is more natural than not doing so." 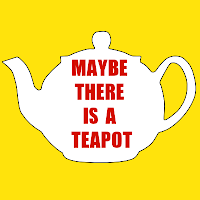 In the interests of balance, this month the New Statesmen asked some well known atheists to explain why they don't believe in God. Philip Pullman wrings his hands a bit about "missing evidence" and ends with a rather limp,

"I would have to agree, though, that God might exist but be in hiding (and I can understand why - with his record, so would I be). If I knew more, I'd be able to make an informed guess about that. But the amount of things I do know is the merest tiny flicker of a solitary spark in the vast encircling darkness that represents all the things I don't know, so he might well be out there in the dark. As I can't say for certain that he isn't, I'd have to say I am an agnostic."

"I don't believe in leprechauns, pixies, werewolves, jujus, Thor, Poseidon, Yahweh, Allah or the Trinity. For the same reason in every case: there is not the tiniest shred of evidence for any of them, and the burden of proof rests with those who wish to believe"

...but he also can't resist a pop at Cherie Blair either:

"Equally unconvincing are those who believe because it comforts them (why should truth be consoling?) or because it "feels right". Cherie Blair ["I'm a believer", New Statesman, 18 April] may stand for the "feels right" brigade. She bases her belief on "an understanding of something that my head cannot explain but my heart knows to be true". She aspires to be a judge. M'lud, I cannot provide the evidence you require. My head cannot explain why, but my heart knows it to be true.
Why is religion immune from the critical standards that we apply not just in courts of law, but in every other sphere of life?"

My absolute favourite is the philosopher, A.C. Grayling.  He may be a bit of a prat with very silly hair, but this made me laugh out loud:

I love the way that he sounds like a particularly irascible teacher dismissing an idiot pupil.  About the right tone, if you ask me. At the risk of generalising (and with special apologies to the Eye in the Sky and his lovely wife) what's the point of reasoning with people who believe in all-powerful, all-seeing deity?  It makes about as much sense to believe in the Flying Spaghetti Monster, who frankly sounds like he'd be a lot more fun at parties. 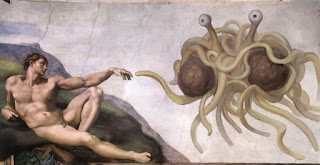 Well, apart from the water into wine thing.  That would be quite handy, I grant you.
Posted by swisslet at 21:30