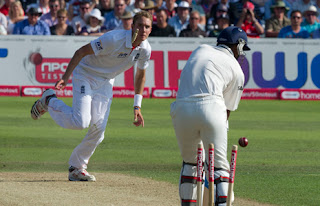 For much of my cricket watching life, England have been hopeless.

It was one thing losing to the great Australian side of the 90s/00s – even if there was something especially depressing about the merciless hammerings they handed us in successive series over 20 years – but watching us failing to beat an essentially amateur Zimbabwe side in 1996/7 and losing at home to a distinctly average New Zealand side in 1999 was to watch a side with no ideas and no sense of direction. Team selection was haphazard at best, and we lurched from disaster to disaster.

Somewhere along the line, this changed. It probably began at some point in 2000/01, when we stole a series in Pakistan in the gloom at Karachi, but slowly but surely we began to win games. At first it was a simple question of becoming harder to beat, but eventually we began to force the pace in games and to win with style. The joyously received Ashes victory in 2005 was probably something of a blip, but we’ve now won the Ashes three out of the last four series, including a resounding, ruthless pummelling of the Aussies last winter. At the start of the current series against India, the current number one Test side in the world, we needed to win the 4 test series by two clear tests to become officially the best Test cricket side in the world. After a brilliant win at Lords in the first test, we’ve just beaten India at Trent Bridge to take a 2-0 lead with a massive 319 run victory with a whole day to spare. 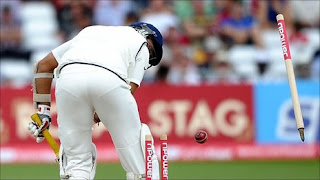 We are on the cusp of reaching the top of the rankings in world cricket. I can hardly believe it.

I was lucky enough to spend both Saturday and Sunday at Trent Bridge watching the game; two glorious days in which I witnessed my first test match hattrick, glorious hundreds by Rahul Dravid and Ian Bell, over 400 runs scored in a day and a very controversial run out incident. In spite of the huge win, this game was on a knife edge for long periods and India had their foot on our throats at least twice, but were unable to conclusively take the game away from us. The game was in the balance until lunchtime on Sunday and then India suddenly subsided to a crushing defeat.

India’s body language in this game has been awful: England’s body language in the field has always been dynamic and urgent, even when we were hopelessly behind on Saturday afternoon, with the players moving in with every ball and encouraging each other all the time.  Soon enough, from being behind the asking, Stuart Broad took that hattrick and turned the game on its head. India, by contrast, even when in front and with a real chance to seize the initiative in the match on Sunday morning, have seemed passive and lacking in urgency, with static players, half-hearted boundary chases and a general sense of lethargy.  If you didn’t know differently, you probably wouldn't pick the Indians as being the highest ranked side on display.

How many English sporting sides in history would you be able to describe as ruthless? Not many, but I really think that this team really has grown to become the best test side in the world. There’s loads of room for improvement, I’m sure…. But for the moment we really look as though we’re on top of the world and deserve to be there. For an England fan, accustomed to disappointment, that feels a bit weird.  There was quite a large part of me that wanted the Aussies to make more of a game of it as we crushed them at Melbourne over Christmas, and another part of me that wouldn't have minded if Sachin Tendulkar made his 100th international 100 today and held England up for a bit.  The England team, however, are nowhere near as sentimental. 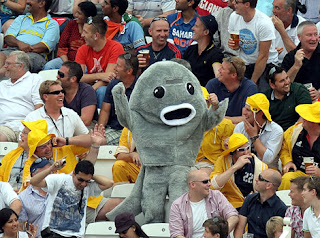 Interestingly, I have never seen as many drunk people at a game of cricket as I did at Trent Bridge yesterday afternoon. I’m hardly a saint, and when we go to a couple of days at the Test, we like to have a drinking day on the Saturday, sometimes in fancy dress (hats off to the guys dressed in full sou'westers yesterday, by the way, and their companion dressed as a fish... see above) and a quieter day on the Sunday watching the game. Yesterday though, I saw a fist fight at a game of cricket for the first time, and there were loads of guys by the bars who were incoherently drunk and pushing each other around and into other people.  I was also slightly uncomfortable with the booing that accompanied the controversial run out decision involving Ian Bell.  It was a strange one, sure, but the Indians did nothing outside the laws of the game and the umpires were impeccable.  The booing that rang around the ground when the umpires and the Indian team took to the field after tea was shocking, and it only stopped when a reprieved Ian Bell walked out to bat shortly afterwards (even if the irritating old guy behind me didn't notice for another 20 minutes, moaning on and on about how the incident had ruined his day).

Annoyingly, the unpleasantness could have been avoided if the authorities in the ground had bothered to tell the crowd on the PA what had happened before anyone walked out.  They could have announced that MS Dhoni had withdrawn the Indian appeal and that Bell -- who was absolutely out according to the rules of the game -- would be able to resume his innings.  They actually waited an hour before doing that, at which point the crowd gave the Indians a standing ovation.... still, why bother telling the paying customer what was happening when it was actually happening?  It seems to me that we were witnesses to a wonderfully sporting act by the Indian team -- something which I'm not sure could or would happen in many other sports -- and yet they perhaps didn't get their due for their generosity from the crowd.  Well, unless you imagine that being booed and harangued as cheats was their due, anyway.....

A great match and a marvellous weekend, all the same.
Posted by swisslet at 18:37