the one thing that you always wanted to.... 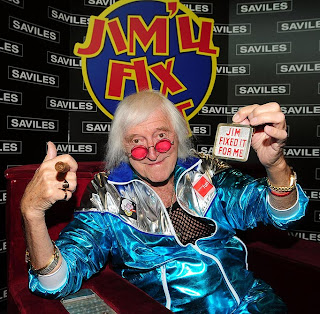 I know that he was nearly 85 and everything, but I was oddly shocked by the news of Jimmy Savile’s death on Saturday. Jim’ll Fix It started in 1975, when I was around one year old, and it formed a staple part of my childhood viewing; one of those programmes that everyone seemed to watch. Savile was probably barely into his 60s when I was watching, but he’s seemed old for my entire life…. And therefore somehow indestructible. News of his actual mortality has therefore taken a little while to process.

Like many people of my generation, I wrote to Jim’ll. In my case, I asked him to Fix It for me and my best friend Will to meet Nik Kershaw, as we were both massive fans of “Human Racing” and “The Riddle”. He never replied of course, being far too busy making cub scouts eat their pack lunches on a rollercoaster or something. Even at the time, what bothered me the most about this was not that I wasn’t going to get to meet a formative musical hero of mine, but rather that I was never going to receive that medal from the great man’s magic chair. I could probably still meet Nik Kershaw now, of course…. but it wouldn’t be quite the same thrill on almost any level now.  [As a sidebar, I had a meeting today that included two people who had no idea who Nik Kershaw was.... because they were both born in 1987.  What do they teach these kids at school?]

Damn you, Savile! That chance has now gone forever. Jangle jangle jewellery. What. Have. We. Here. Etc.

Of course, if Jim had actually fixed it for me, I would be forever doomed to be followed around by some shamefully embarrassing footage of me as a very gawky, goofy seven year old child meeting a midget with a mullet. Can you imagine being Rickrolled by that whenever you clicked on a link in an email? If that happened to one of your mates, would you ever let them forget it? Wouldn’t that be how you’d introduce them to people? Can you imagine it? One of my colleagues was telling me how they knew someone who had it fixed for them to box their way out of a paper bag (their father had been teasing them, apparently). It was set up in a proper boxing ring and everything and I’m sure it was an amazing day…. But goodness, can you imagine the shame that would have followed you around almost from the first day you appeared back in the playground the week after broadcast and would follow you to the day you die?

He was a one off. And whatever you might like to speculate about his life, you can’t deny that he raised millions and millions of pounds for charity (some people reckon as much as £40m) and he made a lot of people very happy along the way.  That theme tune is a weapons grade earworm too.