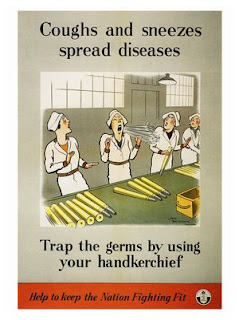 Until recently, I thought that I had a super-efficient immune system: I was very rarely affected by the coughs and sniffles and sore throats that seemed to lay everyone else low several times a year, and if I was, then it was only for a day or two before everything was back to normal.  What's the big deal?

Unfortunately, my super-efficient immune was nothing to do with the amount of exercise I took or the quantity of fruit and vegetables I ate, as I rather smugly assumed, but instead had everything to do with my Multiple Sclerosis.

I'm not very tolerant of ill people; at least of those people who seem to make an absolute song and dance out of every little sniffle (*really* ill people are okay, naturally.  Sample conversation in our house: C: "I've got a headache".  Me: "Taken anything for it?" Subtext: don't come whining to me for sympathy until you have.  I'm a catch, ladies.  Really, I am).  This attitude might partly be to do with the rather gruff bedside manner of my doctor father, but I suspect it has rather a lot more to do with the fact that I simply wasn't ill very often, and when I was, I wasn't really very ill for very long.  Still, in my usual smug and superior way, I simply assumed that because I was able to go to work with a bit of a cold, anyone who had to take time off was WEAK.

Still, as it turns out, my amazing resilience to coughs and sneezes is nothing to do with anything I've done and is instead most likely a happy by-product of the army of rogue white blood cells that otherwise spend their time marauding around my body picking fights with anything and everything, regardless of whose side they're on, specifically focusing their attacks on my brain and spinal cord.

Well, I might have pins and needles in my hands, numb feet, numb legs, weakened and wasting muscles across my arms and shoulders, sporadic problems focusing my right eye, occasional jolts of electricity rushing up and down my spinal cord, fatigue, a possibly failing memory (although, to be fair, that could also be my age....) and I have to stab myself in the thigh with a two inch needle every week, but at least I don't get colds that often.

....and then I woke up this morning with that feeling in the back of my throat and in the tops of my lungs, and I've been coughing and spluttering my way through the day.  It looks like I might have a damn cold, just before I go on holiday too.

Well, let me tell you this: if MS doesn't even have that upside, then you can damn well keep it.
Posted by swisslet at 18:40