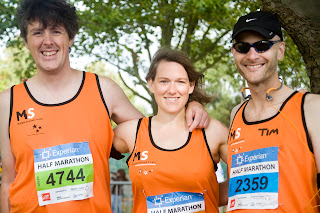 Justgiving sent me an email the other day saying that they were closing down my site for donations.  I know the little widget showing showing the total we raised has been on the right hand side of this page for at least six months, but before I clear it all down and move on, I thought it was worth taking a moment to pause and reflect on what we've achieved:

On September 11th last year, LB, C and I ran the Robin Hood Half Marathon to raise money for the MS Society.  I won't lie to you, it was a bit of a slog.... but between us, thanks to the generous donations of people like you, we raised (including gift aid) the amazing total of.....

That's a lot of money.

More money, in fact, than we raised than running the same race in 2009.  Given the imminent collapse of the global economy and the way that most people are feeling the financial squeeze in one form or another, I want to thank everyone who made a donation from the bottom of my heart.

This is obviously a cause that is very close to me, and it makes me feel so proud that together we were able to make such a big contribution.  This money will help to fund the research to find the cause and cure for this devastating condition and to support and inform those whose lives are touched by it.

Thank you.  You guys rock.

I'm struggling to run much more than about 4 miles at the moment for various reasons (including basic laziness), but I'm toying with the idea of a triathlon at some point in the not-too-distant future (you remember the suits, right? both of 'em?), and have a mind to work my way up to the Olympic distance (1500m open water swim, 40km cycle, 10km run).  The first symptoms of what was eventually diagnosed as multiple sclerosis forced me to withdraw from the 2005 London Triathlon with all the training done and about a week to go before the off.  My name is quite literally on the damn event t-shirt.  It feels like unfinished business....