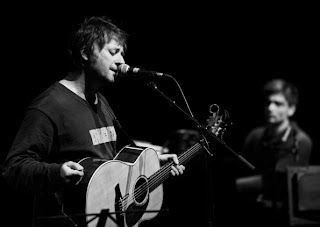 I’ve been to watch comedy at the Glee Club, in what used to be Jongleurs down on the canalside in Nottingham, but I’ve never quite managed to get here for music – in spite of what often looks like a quite enticing bill featuring artists like the Unthanks, Lloyd Cole and The Staves. Thanks to a friend’s new job keeping her late in London, I finally had the opportunity to get down there to watch a gig. I’m getting dangerously out of the habit of going to watch bands; I don’t want to get out every other night or anything like that, but in spite of becoming more and more aware of some of the diversity on offer in Nottingham’s smaller music venues, I’ve not been making the effort at all. So when the opportunity arose, I fought off the desire to stay in front of a fire with the cat, a beer and a good book, and put on my best folk gear to accessorise my beard, all the better to blend in with the King Creosote and John Hopkins crowd.

When the ticket offer came, I was only very dimly aware of King Creosote and couldn’t really recall hearing any of his music. A quick google revealed the depths of my ignorance: “Diamond Mine”, his collaboration with Jon Hopkins, was widely acclaimed as one of the best albums of 2011 and was a whisker away from beating PJ Harvey to the Mercury Music Prize. A quick listen to “Bubble” on YouTube and I was soon downloading the album for a closer listen. It’s really good. I usually chose driving rock music to accompany my running, but yesterday lunchtime saw me gently encouraged by some lyrical Scottish folk about fisherman backed by piano and noodling electronica. It’s a lovely album.

It’s early doors at the Glee Club as you need to get there by about 7pm to get a decent seat…. But where I will often skip a support artist and time my arrival for the main act, this time around I was very glad to watch “Withered Hand”. I’d never heard of them before the night, and the name isn’t exactly a promise of belly laughs, but Dan Wilson and his tiny voice actually turned out to be so good that I bothered him at the merchandise stand after the gig and bought a copy of his album. On the night, it was just him and his guitar, but his self-deprecating banter and his interesting lyrics sucked me right in (that and the news that as part of the tour, he’s started doing press-ups with Kenny (aka King Creosote). They’ve got up to 5 apparently, and he’s knackered). “This song is mostly about my father-in-law”, he told us, before thinking for a moment and adding, “But as he’s at home babysitting so I can come on tour, please don’t blog about that….” He also tried pretty hard to convince us that “For the Maudlin” wasn’t actually a depressing song at all. Well, I’m not sure about that, but he’s well worth a listen.

I have no idea how Kenny Anderson and Jon Hopkins met. The one lives in a fishing village in Scotland and has released something like 40 albums (not bad going for someone who must be barely 40 years old), the other is in his early 30s, lives in London and is a regular collaborator with the likes of Brian Eno and Coldplay. However they originally met, they have spent time over the last seven years slowly putting together “Diamond Mine”. They might be an odd couple, but the dynamic works well onstage: Hopkins is virtually silent throughout, sitting behind his piano, squeeze-box and laptop, and Anderson with his acoustic guitar. For the first half hour of their set, Anderson is silent between songs too, concentrating on allowing the songs from the album to wash over us. The effect is a spell-binding reproduction of the album. In fact, it’s almost a shame when he does start talking, breaking the spell but allowing his personality and wry wit to shine out (he's up to 12 press-ups apparently, but don't tell Dan as he doesn't want to make him feel bad). I get the impression that he can’t quite believe that after 40 albums he’s really got an audience now – the last time he was in Nottingham he says he played to about 4 and a half people instead of the couple of here tonight (my gig outfit of brogues, beanie and beard seems to fit right in with the rest of the audience too, it must be said. Folkies have been wearing the urban lumberjack look since time immemorial, it seems). They’re playing the Shepherd’s Bush Empire in London in a couple of days and seem slightly anxious to fill the much bigger capacity (2,000), encouraging all and sundry to come down and help them sell another couple of hundred tickets.

Most of the songs are their own, but they do play a couple of covers towards the end, Simon and Garfunkel’s “Only Living Boy in New York” and Tim Buckley’s “Song to the Siren” (which I rather embarrassingly identify as a John Frusciante song. Those lost heavy metal years have done little for my basic folk knowledge….in my defence, Frusiciante did cover it, although he’s hardly alone in that). It’s a good night. I’m not entirely accustomed to all-seated gigs, but here it seems about the right way to appreciate the music (although next time I’m not sitting in the main runway to the toilets). It’s good to get back into the gig-going groove though, and it’s also good to discover two acts entirely new to me. It’s also nice to be amongst an audience where stroking my beard appreciatively doesn’t set me out from the crowd…. Oh, and Kenny, your Irish accent really needs some work as it made everyone (himself and Hopkins included) corpse in the middle of a rather delicate song.  Otherwise: excellent.


[Mike's review of this gig for the Evening Post is here. He only had 250 words, but I don't think he was quite as impressed.]
Posted by swisslet at 18:07