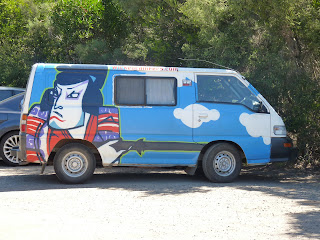 As winter drags on, it’s perhaps an odd time to bring this up… but I miss living in a camper van.

Our first camper took us from Melbourne to Adelaide via the Great Ocean Road and the Grampians. We’d decided long before that we didn’t want anything fancy, so we’d picked up a Wicked camper; little more than a converted van with the back seats taken out and replaced by some storage space you put some wafer-thin mattresses over. We had sleeping bag liners with us in our bags, and as it was late February and we were in Australia, my wife thought she could live without any of the blankets we were offered. As I’m pretty much always cold, I took them, and then spent the rest of the week wrestling my wife for them as she discovered that those beautiful, cloudless nights on the Ocean Road were bloody cold in an uninsulated van. 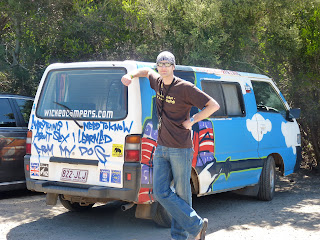 Our second camper was my favourite: a 4x4 number that we picked up in Cairns and drove down to Brisbane over the next ten days. We were now smart enough to grab an extra couple of mattresses from the depot to try and avoid bruised hips, but in the heat of tropical Queensland, the cold wasn’t an issue and now we had to work out a strategy to deal with the mosquitoes, especially when it was now so hot at night that it would be madness not to leave the doors open to allow air circulation. To be honest, my mosquito protection was mainly the fact that they prefer to bite the succulent flesh of my wife (to the tune of about 100 bites to 1), but after one particularly difficult night in Townsville, we got ourselves a mosquito net and did our best to rig it up. A great plan, but after waking up one morning in Rainbow beach to find the net filled with mosquitos who were small enough to get in but then, post-feed, too fat to get out, we learned that we needed a smaller-gauge net…. You live and learn, right? I had about 5 bites, for goodness sake and was outraged…. Poor old C., meanwhile, looked like she had smallpox. 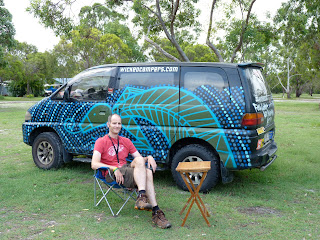 That van was great, but it would be remiss of me not to mention how glad we were of the warm welcome, the delicious meal and the honest-to-goodness actual bed that we received at Margaritaville, just outside Gympie, from Deb and Jaimie.... still the best birthday breakfast I think I've ever had.  Please come and visit so we can try to return your kindness. 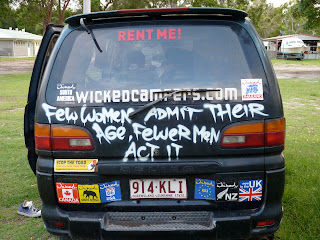 We picked the third van up in Christchurch.  The weather on South Island New Zealand was always going to be a little more wild and woolly, but by now we were campervan veterans.  You see lots of people travelling around NZ in these vast great big lorries, with their own toilets, showers and so on.  When the wind was blowing so hard in fjordland that the camper van was rocking and I was desperate for a pee, I could sort of see the attraction, but we stuck it out with the same kind of basic van from Wicked that had served us so well.... 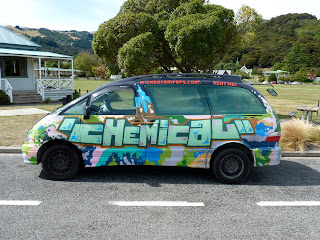 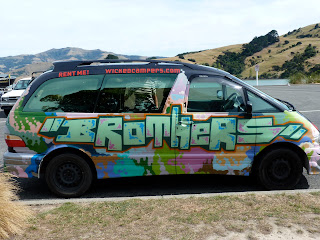 ....it's just that this time we weren't going to be cold and took the precaution of building ourselves a little nest of duvet, down-covered mattress toppers and lots of possum-merino layers.  It had a creaking fanbelt and was old as hell, but it was home for a month and it was great.  Cheap as chips too... apparently no one starts in Christchurch and works their way round back to Auckland, so it's a much cheaper way around to rent a van. 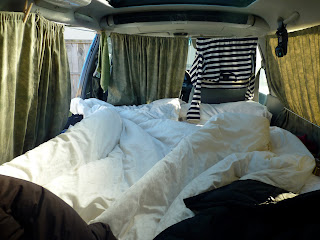 Anyway.  It's a brilliant way to travel around Australia and NZ, and as I slog my way through a working week that already feels like it's never going to end, those three months we spent down there exactly two years ago are helping to keep me warm.