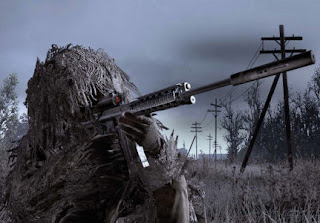 When I first bought a Playstation 3, a few months ago now, I picked up several games to get me started. As things turned out, in practice I spent almost all of my time playing Batman: Arkham City and the other games barely got a look in. As one of my colleagues remarked, Batman was so good that the danger was that I was immediately setting the bar impossibly high.

Arkham City is indeed a brilliant game – perhaps the best I’ve ever played in a gaming history that runs from Chuckie Egg and Yie Ar Kung Fu on the Spectrum all the way through several PCs and the first two generations of Playstation. Well, I say it’s the best game I’ve played, but to be honest I’ve still got a massive soft spot for some of the early incarnations of Championship Manager…. And for Bard’s Tale on the Amstrad. Well, and perhaps the old Hobbit strategy game too (“Thorin sits down and starts singing about gold....”)

I reached (more or less) the end of the main storyline on Arkham City last week. I’m only about 50% of the way through the game, but once Batman walked out of the prison compound after completing what turned out to be the final mission, I realised I was going to have to play the game all over again… this time paying more attention to the side plots and extra bits. Not a problem, but I wanted a bit of a break first.

I popped Call of Duty 4: Modern Warfare on and thought I’d have a crack at something else for a bit.

I’d read a lot about this game before buying my console, and by all accounts it was amazing, so decided to give it a go.  The bargain price-point certainly helped....

This isn't a new game by any stretch of the imagination (2007), but it was immediately clear that technology has moved on a long way since the shoot’em ups I used to play on my Amstrad back in the day and I quickly found myself immersed in a world of hyper-realistic military conflict. I finished the game (on the easiest setting) before the end of the same weekend, but I was troubled.

It was two things that bothered me really:

1) That the game is essentially set now and the plot revolves around SAS or US Marine Special Forces units carrying out missions against either Russian Ultranationalists or Middle Eastern terrorists. Obviously, no actual organisations are mentioned by name, but I was mildly uncomfortable with the politics of “good” and “bad” as displayed in the game. It’s one thing taking out aliens or zombies and quite another thing to be taking out something so rooted in contemporary politics. Covert assassination missions in the Ukraine? I’m far too wishy-washy a liberal to want any part of that.

And I had to shoot some dogs too. 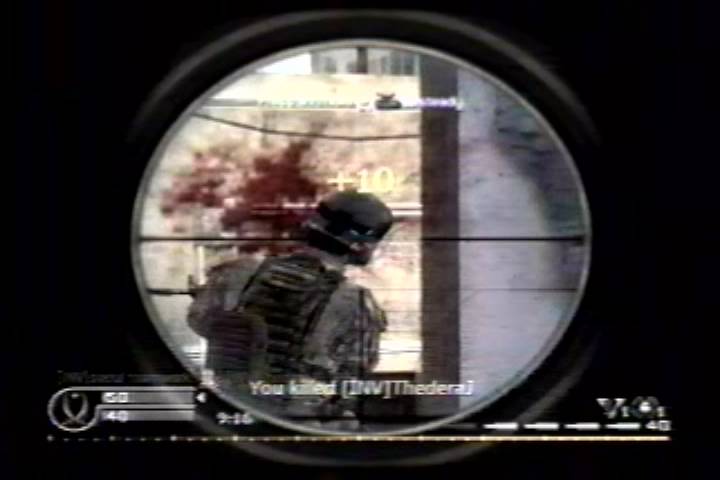 2) The graphic violence (when combined with the realistic setting). This is a game that rewards efficient killing, and a shot to the head results in a spatter of blood as you take your enemy down. At one point, a tricky sniper shot was rewarded by blowing someone’s arm clean off. This can’t be doing me any good, right? The most troubling mission of all was one where I was manning the gun on a air support mission for a team on the ground. My view was a choice of either light or dark infrared, and I could select between three calibres of gun to support my colleagues on the ground, ranging from a machine gun that strafed a small area, or some quite heavy weaponry that took out everything in about a 50m radius. This was beautifully realised, and looked almost identical to the footage you sometimes see on the news of bombing missions. Very impressive… right down to the human bodies being flung out of the blast radius as I cleared a path for my guys on the ground. Most troubling of all was that this was probably the mission that I enjoyed the most. 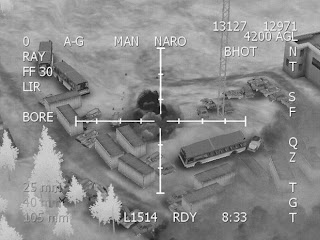 Obviously, the fact that I played the game all the way through over a day or so doesn’t give me a great deal of moral high ground here, and I fully intend to go back in and play it on a harder setting too. It’s a fantastic game…. But it bothers me. It’s clearly a step up from attending the games at the Circus in Roman times and cheering as actual people get torn apart, but just how far a step up is it really?

…and don’t even get me started on morals of the multi-player game that sees people gleefully tearing each other apart and then posing over the corpse for the benefit of the kill-cam view for the recently killed player (And to think that we wonder at the behaviour of some of our troops towards captured or killed enemies during an actual war.  Although, to be fair, I did also read an article the other day about how games like these can lead to altruistic behaviour amongst gamers....)

Batman was violent, but at least it was always non-lethal violence. Maybe I’m too sensitive for this kind of thing and should stick to sports sims.  Is this sort of gaming a reflection of our society?

*ponders whilst applying camo paint and a ghillie suit, grabbing an assault rifle, a few flash-bangs and heading back into battle*
Posted by swisslet at 18:35