watch out where the huskies go....

It snowed pretty heavily around here on Saturday.  Heavily enough that I had cause to question the wisdom of my exercise schedule, anyway.  I'd decided that I was going to swim on Saturday before the rugby kicked off and then go for a run on Sunday morning.

All fine in principle, and the swim went well enough, but come Sunday morning and I was facing up to the prospect of slogging my way through at least three inches of fresh snow.

Obviously I wasn't about to change my exercise plans.... so I went out anyway.  It was a surprisingly warm day and it was bright enough in the snow and the sunshine that I needed to wear a pair of sunglasses.  Other people out and about with their sledges looked at me like I was insane, but actually running on fresh snow is quite nice.  You have to be slightly careful where you put your feet, of course.... 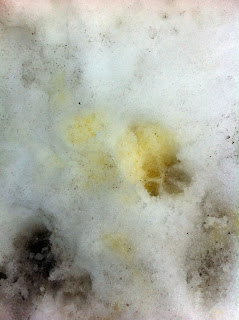 ....but otherwise it's pretty grippy.

I'd say it took me about a minute a mile longer to run my normal route, 5 minutes longer in total, and by the end my legs felt as though they'd had a much more strenuous workout than normal, but otherwise it was great.  As it mostly runs alongside the river Trent, my route is reasonably picturesque anyway, but in fresh snow it looked great.

It was a good run, with the added bonus that my trainers were spotless by the time I got home: months of ingrained goose poo all scrubbed away in the snow.  Bonus!

I went out again at lunchtime on Tuesday, but by now the snow had been churned up a bit and had re-frozen, so I had to take a little more care each time I put my foot down.... but it was still pretty good: quiet and fresh and a whole lot better than sitting at my desk getting grumpy.  Lots more yellow snow though.

I assume it's mostly dogs who are pissing in the middle of the tow-path along the canal, right?  Most people - if they absolutely had to go - would go up against the wall, no?

I know I must run through dog pee all the time, but all of a sudden I can see it.... and it appears that a lot of dogs - a lot of BIG dogs - get walked down by the canal near my office.

Hmm.  Maybe I should clean my trainers more often.
Posted by swisslet at 19:41