On the whole, I reckon that I’m a fairly phlegmatic person: my mood is generally pretty even and I like to think that I can roll with the punches and don’t sweat too much about the things that I can’t change. I’m good in a crisis.

On the other hand, I have an obsessive streak and a tendency to get very worked up about the tiniest of things. To pick just one example, we have specially designated parking spaces at work for people who car share, and it’s a source of some amusement in my team that I am constantly railing against people who park in them when they are travelling on their own. It’s not a big deal really, but it seems to me like a casual, petty rudeness that makes the world a slightly less bearable place. There’s generally more cars than there are spaces in our office, but the car share spaces are right at the front of the car park and are designed as a small incentive to encourage people to share rides into work, thus reducing pressure on the car park and also reducing our carbon footprint. I generally share a ride into work with a friend of mine, and although we’re usually arriving in the morning early enough that there are still plenty of spaces for everyone, it still galls me to see people travelling on their own pulling into a designated car share space when there are ordinary spaces not 10m away. I suppose my anger boils down to the fact that I just do not understand the thinking that leads these people to believe that they are special and can just blithely disregard the scheme for the sake of saving themselves one minute’s walk across the car park. The searing heat of my death stare each morning doesn’t seem to be putting them off, either…. (and don’t get me started on why the scheme isn’t enforced….)

Psychologists, philosopher’s and scientists have apparently been arguing over altruism,

As the wiki definition outlines, “pure altruism consists of sacrificing something for someone other than the self (e.g. sacrificing time, energy or possessions) with no expectation of any compensation or benefits, either direct, or indirect (for instance from recognition of the giving).” It is the opposite of selfishness.

Can such a thing exist? Is it compatible with a Darwinist view of evolution, or is it actually an integral component of natural selection?

These are big questions, and I won’t pretend that I know the answers. What I do know is that I derive a sense of wellbeing when I hold a door open for someone, and also when someone pauses in a doorway to let me through. It’s a small kindness, but it’s a kindness nonetheless. The world is full enough of petty rudeness, isn’t it?

Speaking of which…. Here’s another one for you: I have a locker at work where I can leave all my stuff when I pop out for a run at lunch.  They guy who has the locker next to me frequently does this: 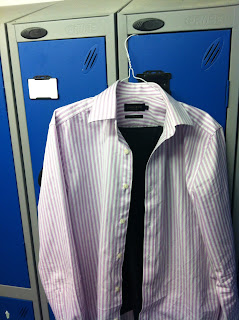 He hangs his shirt on the outside of his locker.  We're often in the changing rooms at the same time, so he must know that doing this makes it slightly awkward for me to open and access my own locker, and we also both know that his shirt will hang up perfectly acceptably inside the locker... but he still does it anyway.

At best, I think it's inconsiderate, and another of the thousand paper cuts of rudeness that we all get every single day from other people.  I don't believe in karma, but if there was such a thing, there sure are a lot of people who have it coming to them.

Mind you, locker guy got his karmic returns today.... I pissed in his stupid, pointy shoes.*

You get what you give.