We were in London this time last week enjoying a delicious Korean meal in Soho and the company of a dear friend.  As we made our way back through the backstreets around Shaftesbury Avenue, I was rather taken by this particular 'stop' sign: 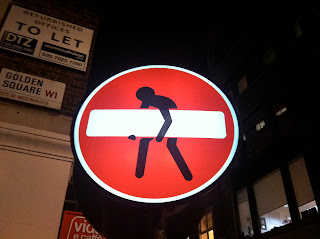 As I paused to take a quick photo from the pavement, a rickshaw driver pedalled behind us on the road.  In passing us, he shouted out -  rather disdainfully, I felt -  "TOURISTS!"

Look: I realise that rickshaws, often passed from father to son,  have been part of the fabric of London's streets since their invention in Islington during the early Victorian period.  I also know that these honest, hard-working guys get the vast majority of their trade from locals and barely get so much as a glance from visitors to the world's greatest capital city.... but really, there's no call for that, is there?

It would be a terrible shame if one bad apple robbed Londoners of their well-earned reputation as some of the warmest, friendliest folk in the world.  Before you know where you are, you soon won't be able to make eye-contact with a stranger on the Tube, exchanging warm smiles and friendly greetings at the start of what could be a beautiful friendship.

Think how much less enjoyable rush hour would be once that little pleasure is gone....it really would be just you with your face in a stranger's armpit.  A rude stranger.