can you dig it?

After a good, relaxing break around my birthday last week, it was back to work today.

Well, I say that, but as my team spent all day at a local primary school laying out and digging up some allotment plots, I'm not sure that really counts as work.

Actually, let me rephrase that: judging by how my body feels as I type this, then pushing a rotavator around for about six hours definitely counts as work.  It's certainly more taxing physically than a day spent drinking coffee and attending meetings, anyway.  It's a good deal more rewarding too. 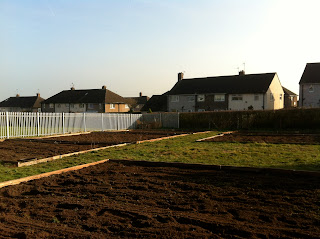 The site started out looking like a wasteground, but after several hours of picking up stones, digging out weeds, laying out the beds, rotavating the ground (at least two passes) and then raking over the soil.... the result was pretty pleasing.  We even creosoted the shed (three coats).

As a bonus, we were visited several times during the day by classes of kids who were brought down by their teachers to come and have a look at what we were up to.  They were lovely.  The school is in one of the less privileged parts of Nottingham and although it's pretty large, we were told that only three parents volunteer on a regular basis to help the school: most of the parents simply don't want to get involved for whatever reasons.... although illiteracy amongst them surprisingly is high and alcohol and drug-addiction are sadly commonplace.  Apparently about 1 in 5 of the pupils attending the school are autistic to some degree or other, and the proportion is rising every year (with many more boys affected than girls).  The most severely affected need one on one attention from a teacher and can be prone to rage and confusion (there's one little girl who is very bright - bright enough to fashion detailed models of Buzz Lightyear out of paper, complete with ball joints on the arms and legs - but who is entirely unable to respond normally to people and will do the exact opposite of what she is asked.  Apparently she can only relate to people if they do something for her, everyone else - including all other children - are just objects.  It's heartbreaking, but she was brought down to see us at work during the afternoon and was a delightful little girl who is clearly being well looked after by the school).

Funding for the extra teachers needed to care for these kids is being cut by the government, and the school is increasingly dependent upon donations and the work done by volunteers like us.  It's eye-opening and humbling to hear stories like this, and it really puts into perspective how much money we get paid to do the jobs we do when a primary school teacher gets far less for what is certainly a more worthwhile job.

Tonight is one of those very rare times in my job where I feel like I've achieved something worthwhile with my day.  My muscles are tired and my back is sore, but at least I've done something useful today.  Far more so than on a normal working day, anyway.

(there's apparently a video of me wrestling amusingly with the rotavator.  If I can get hold of a copy, I'll stick it up for you to have a giggle at.....)
Posted by swisslet at 17:52