I think I’ve cracked the secret to happiness. Well, a small part of it anyway.  A tiny part really.... but a part nonetheless.

It’s a secret that comes in two parts, but I didn’t realise until I put them together how powerful a force for good they really were. The first part I put into place several months ago, but I only got hold of the second part, completely independently, on Saturday afternoon…. But as soon as I put the two pieces together, it all very quickly clicked into place, and I’ve been experiencing a zen-like calm ever since.

As I’m a generous sort, I’ll share so that you too, dear reader, can benefit from this serendipitous discovery.

The first piece of the puzzle was the impulse purchase of a little plastic dish in the shape of the tea pot. I saw it in the Co-Op when I was in there for some entirely mundane reason or another. I saw it at the grand price of something like £1 and immediately saw the soothing balm it could pour onto all my kitchen troubles. You see, I generally make tea on a mug by mug basis, dunking the tea bag directly into the cup next to the kettle. This works well enough, but the problem is that I then have to walk across the kitchen to the bin with a hot, spent tea bag balanced on a spoon. It’s all highly unsatisfactory. With the addition of a little plastic dish in the shape of a tea pot, placed carefully next to the kettle, this problem immediately disappeared. Yes, alright, so I have a stack of dried up, used teabags next to the kettle… but I can live with that.

Life, my friends, is good. 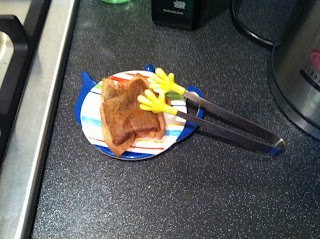 In other news, I turn 38 on Wednesday and will be spending the next few days in London to celebrate. We’re having lunch at Albert Roux and Michel Roux Jr’s restaurant at the Landau; we’re going to watch Graham Linehan’s adaptation of “The Ladykillers” at the Gielgud theatre (starring Peter Capaldi); we’ve tickets to see the Wildlife Photographer of the Year exhibition at the Natural History Museum; we’re going to catch up with some friends and maybe buy a hat…. It’s all good.

See you on the other side.
Posted by swisslet at 18:14