I'm floating in a most peculiar way....

I've mentioned this before, but every Friday morning, I have to sit down and write a brief update for submission to a weekly email newsletter that is circulated around our department. The creative process is simple: I ask my boss and the various other members of my team if they have any highlights I should talk about, they shrug their shoulders and look at me blankly and I have to do the best I can with often very thin pickings indeed.

This, coupled with the fact that the report as a whole is so dry as to be practically unreadable (it is, in fact, almost certainly not read by 95% of the people who receive it....it is met each week with a resounding lack of interest) has led me to spend the time mostly entertaining myself.

It started with the use of song titles as the headers to each of the two or three little paragraphs that I write each week. I would have theme weeks where I tried to insert as many song titles or references into the text as I could (one week it was 80s songs, another it was references to horses).  The lack of actual content and the general pointlessness of the whole exercise soon saw me submit updates that had pretty much nothing at all to do with anything we might - or might not - have achieved as a team that week: I've quoted long chunks of things as diverse as "Blue" by Joni Mitchell, "The Love Song of J. Alfred Prufrock" by T.S. Eliot and "She Walks in Beauty Like the Night" by Lord Byron; I've gently mocked some of our more ridiculous processes and made friendly fun of other teams.  I've pushed and I've strained at the boundaries of what might be considered acceptable in a business update email, trying to keep it interesting and daring the censors (the members of the leadership team) to amend my submission before they mail it out.... but they never have.  Each week, the report is issued with my entry entirely intact as I wrote it...

All, my friends, to a reception of deafening silence.

So this week, I included this: 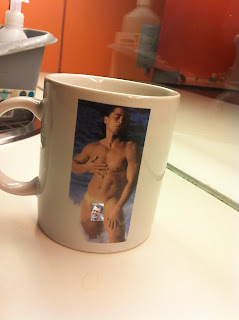 It's a picture of a mug we found in the kitchen near our desks.  We were somewhat taken aback to discover a mug featuring an entirely naked man in the office, so I thought I'd make reference to it in a "Lost Property" section in my report.  Clearly, I couldn't send it out as it stood, so I edited the picture to insert a picture of my boss's head over the critical area.

I sent it out to the leadership team for collation, copying in my boss as always.  He was stony-faced.
"You've gone too far this time, you've crossed the line"
"It's okay, I've censored the picture so it's decent"
*cue hilarious double-take as he realises what I've covered it with*
"Why me?"

Too much?  Well, if they didn't like it, the leadership team member putting together the update could simply take it out before issuing the report.  No one has ever really told me what is supposed to go in this report, and there aren't any guidelines on acceptable content, and as no one was offering up any alternatives, I've pleased myself.  I've always threatened my boss that the day I get censored is the day he can find someone else to write the damn thing for him... I was half hoping this might be my moment.

Nah.  They issued it untouched to pretty much no reaction.  Well, one guy asked me why I was quoting some obscure poet ("That's Byron, darling...."), but otherwise pretty much nothing.  My splendid act of career nihilism (publishing a picture of a naked man with my boss's head over his penis?) has barely caused a stir in an uncaring world.

Where on earth do I go from here in next week's update?

I can't help but think that the amount of effort and creativity I put into this bloody thing every week is like throwing pearls before uncaring swine....but then I remember that I'm a blogger too, and that's just what we do.
Posted by swisslet at 18:55

Email ThisBlogThis!Share to TwitterShare to FacebookShare to Pinterest
Labels: blogging, my brilliant career