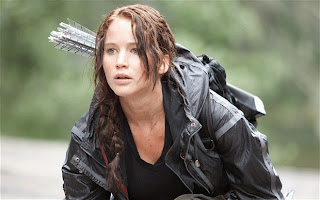 We went to the cinema on Saturday afternoon to watch "The Hunger Games".  I thought it was pretty good, but I'm not going to bore you with an in-depth review that makes comparisons with a Japanese film that I've never seen.  You can find plenty of them for yourself.  Instead, I'm going to have a moan about the people sitting just behind us.  Sound reasonable?  Ok. Good.

There were about five or six of them, a mixture of boys and girls.  They were young; perhaps in their early twenties or a little younger, but they didn't look like mouth-breathers to me.  They were dressed okay - neither in shellsuits or filled-nappy harem pants - and looked as though they might be students.  They were carrying a couple of huge bags of popcorn when they came in to sit down, but I didn't see anything to be alarmed about.

In fact, initially I was amused by them:
"Ohmigod.  I saw his Facebook status, and within thirty seconds I had text messages from both the other two..."

I think it's fair to say that my experience of being nineteen was a little different.  I still went to the cinema with my friends, but when I wanted to talk to one of them, I used to have to use the telephone in my parents' front hall to ring the telephone in their parents' front hall to set things up.  It was that or send them a letter.  I was watching a documentary on Britain in the 1970s last night, and I thought that it looked like a different world.  Never mind 1973.... 1993 seems like a different world to these kids.

It was when the lights went down that my problems really started.  For the first thirty minutes or so - and it was nearer 45 minutes in all - I was largely oblivious to what was going on around me as the advertising and previews on the screen were blasting out at deafening volume.  ("Battleship"?  They've seriously made a film based upon the board game?  Starring Rihanna? WTF? Also, have we really reached a point where the advertising makes up 25% of the length of the entire screening?).

Once the main feature started though, the volume dropped somewhat, and as I settled into the film, I began to be aware of noises around me: specifically the noise of a bunch of kids stuffing their hands into large paper bags, rummaging around for a handful of low quality, overpriced popcorn and then the sounds...the endless sounds...of mindless chewing.  It was like listening to a herd of cows chewing contentedly on the cud.  What made it worse, so much worse, was they way they passed these bags around so that someone sitting a little further away could make even more noise as they rummaged around for their handful.  They were entirely oblivious, too of the noise they were making in quiet bits of the film, and apparently immune to the hate lasers my wife trained on them every few minutes.  I don't think it even occurred to them for a moment that they were maybe being a little inconsiderate.  Those bags of popcorn lasted for the whole film.  I saw them in the foyer afterwards and they were still dipping in a hand and chewing.  Do those bags access another dimension or something?

After an hour or so of this, one of the girls stood up and announced -- to each of the others in turn, as she passed them in the line of seats -- that she was going to the loo.  Literally one minute later, she was back, telling each of them in turn as she passed them on the way back to her seat that she couldn't find the toilet.

Then a phone rang.... and was answered.

It didn't ruin the film for me, but it did make me pause to think that these kids - university students, remember, hardly pond life - seem to have the shortest of attention spans.  They've grown up in a world of instant gratification and consumption.  I don't think they're used to sitting still and silently for more than a few minutes at a time and perhaps simply don't know how it's done.  Or why it might be necessary.  They've had mobile phones for most of their lives and can't imagine why they might sometimes need to be turned off, or why their email or Facebook doesn't need checking every few minutes.  I overheard them in the foyer talking about what they were going to see next: Battleship.  It's got Rihanna in it.

Couldn't we put these people into an arena and make them fight to the death or something, like, totally for my entertainment?  They could fight Simon Cowell or something.  I'd totally watch that.

Good grief.  When did I get so old?

It's a good film though.  I enjoyed it.  Well worth seeing, if only for Wes Bentley's epic facial hair. 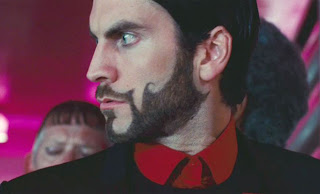 Looks pretty high maintenance to me, but something to think about perhaps?
Posted by swisslet at 18:21