could it be that it's just an illusion? 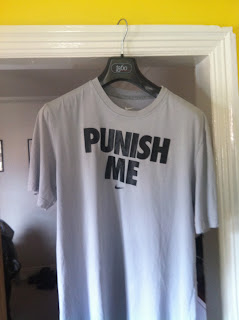 I've been struggling to get much distance into my running at the moment.

A normal week for me would usually consist of three runs and a total mileage of 12-15 miles.  When I was training for last September's half marathon, by the end I was putting in more than 25 miles a week, but recently, I've been struggling to get much more than about ten miles done in a week.

I realise that all these things are relative, and that ten miles is still a lot more than no miles at all, but what this means to me is that I've been dropping about a mile off the distance of my average run every time I go out.  Even then, dragging myself round a comparatively meagre 3.25 miles has felt like a real slog more often than not.

The temptation is to blame my MS, but I'm pretty sure it's not that simple.

Yes, alright.... I do seem to have started dragging my left leg a lot more now than I used to, and yes - as I mentioned the other day - this has started to take its toll on the cartilage in my knee.... but I'm still reasonably sure that a lot of this struggle is in my head rather than in any great physical decline.  After all, a simple look at the statistics of my runs tell me that I'm still maintaining a pretty good pace of under 9 minutes per mile (traffic light stops permitting!).  That's pretty much as fast as I have been running at any point in the last couple of years and significantly faster than my pace before that.

This has been somewhat on my mind: I hate the idea that I might be allowing my MS to provide me with an excuse for slackening off... that simply is not acceptable.  After slogging my way around a short lunchtime run at work on Friday, I swore that I would force myself to do a much longer run when I went out on Sunday.

I went swimming as usual on Saturday morning.  Nothing too taxing: just 50 lengths of drills using paddles and a pull-buoy, but later on that afternoon, C. pointed out to me that she could hear from my footsteps as we pootled around town that I was dragging my left leg and scuffing that foot but not the other.  I hadn't even noticed, but obviously that's a bit of a worry.  The sensible thing then would clearly have been to give my body a break for a few days.

No.  On Sunday morning, I got up and ran nearly 7 miles along the canal towpath.  It was a nice day, if a bit breezy and chilly, but the run went pretty well.  If I hadn't had to cross the ring-road (twice), then I think I would have gone round in less than 9 minute miles too.  By the end, I was consciously picking my left leg up a little higher to try to avoid scuffing, but otherwise didn't have too many problems and -- in as much as you ever really do -- actually really enjoyed my run.  I haven't noticed too much lasting muscle fatigue today either.  It's all good.

I'll probably only do another short 3.25 miles at lunchtime tomorrow, but I think I've proven the point to myself: I will not allow my MS to be an excuse for inactivity.

One day it may stop me doing all kinds of things, but today is not that day.
Posted by swisslet at 18:36