I'm sure this is true in any large organisation, but there are just some things I come across in my job that I just do not understand.  HR is one of them. No matter how many times I come across my esteemed colleagues from Human Resources or any of their (many) initiatives, I just can't seem to see the point of them.  Oh sure, I understand the concept right enough...but the execution?  It's as if they've seen a presentation at some point that has outlined at the highest overview level, perhaps drawn on an etch-a-sketch,  what the company does.  From this, they have then set about devising extremely detailed and involved plans for how everyone else should do their jobs.

Perhaps I'm being unfair.  It's not as though HR stand alone as a department of incompetents.... I also have a particularly fondness for our internal communications department.  It's not just the slipped apostrophes and the typos that these communications professionals regularly make that catch my eye, it's the little things too: in a cost-constrained environment where we are told that every pound we spend in head office means we have to sell £10 of stuff in our shops, I admired their decision to buy about 30 high definition widescreen plasma TVs to put up around the building so that they could show PowerPoint slideshows announcing what the special in the canteen is today (although, ironically, at lunchtime - when this information is presumably coming into its own - they turn that off and allow us to watch the news with the subtitles on instead... or if we're really lucky, the end of Homes Under the Hammer.).

Imagine my excitement when I heard that we were going to be launching an internal communications TV channel!  What better way to spend your way out of a recession than with something pointless that will not make a damned bit of (positive) difference to our bottom line and will be ignored by most people? 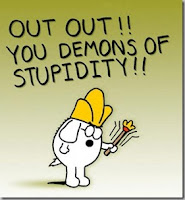 Since it was announced as "coming soon!", in a frenzy of anticipation we've been passing the time by imagining the kinds of programmes that could be on the schedule:

This new and exciting internal communications channel released its first installment today..... so naturally I was a little disappointed to see that it was really only a ten minute round-up of a series of very dull looking events that our billionaire owner and his other half have attended around the world in the last few weeks.  They might have been in Thailand or Norway, but it seems that hotel conference rooms and bored journalists look much the same everywhere.

There was one thing that caught my eye, though.... this historic first edition - a collector's item in years to come, surely -  was being presented by my wife.

I don't really know whether to laugh or cry.  The obvious response is to mock, but the plain truth of the matter is that she's far too good for shit like this: she's the director of a major international company and I actually find it mildly insulting that she has to do this sort of thing when she clearly has far better things she could be more usefully focusing her talents on.

She looked great and was - of course - an absolute natural at linking everything together.  I'm very proud of her.... she's doing fantastically well and continues to give me hope that good things do happen to good people....but wonderful though she is, this thing is still fundamentally an entirely pointless exercise and a waste of her considerable talents.  Where's the justice in the fact that Marion Cottillard -- a classmate of C at drama school in France back in the day -- has won an Oscar and worked with Johnny Depp, and my wife gets to front up something inane like this?

She's as fantastic at this as she is at almost everything else she puts her mind to.... but you can't polish a turd and she should never have to.

Well, her choice of husband excepted, obviously.
Posted by swisslet at 18:38