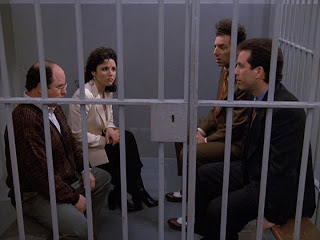 no hugging, no learning....
Between about 1999 and 2002, right around the time of the dot com boom, I had the immense good fortune to be working on putting together a major website for the company where I work.  Normally pretty conservative and slow-moving, the company was pumping extraordinary amounts of cash into getting this thing off the ground.  They didn't even really know what this thing was or what it should do, but that didn't stop them throwing millions of pounds at the idea, whatever it might turn out to be.  It seems ridiculous now, but for a while they genuinely seemed to think that they would make more money from content than they would from product, in spite of the fact that they were a retailer and already had a thriving million pound catalogue business up and running.... but it was a crazy time.

I worked on the technology team, and to help us on the journey, we employed a hip consultancy that specialised in online.  At this point, no one really knew what they were doing, and these guys brought young, bright kids fresh out of college over from the USA to try and convince everyone - including themselves - that they were really on top of the game.  I went down to their London offices for two or three days every week, and there was so much money floating around that they had free vending machines and had massage therapists working out of their meeting rooms at lunchtimes.  We had scooter races through the office too, with official lap times and everything.

For someone like me, who had spent the first couple of years of my career working in the bowels of a traditional IT department, these were exciting, momentous times.   Even back in Nottingham, we were in a different building to everyone else, based in the town centre; although we didn't quite have scooter races and free massages, it was about as far removed from the traditional company culture as it was possible to be.

We worked stupidly long hours, including working several sessions all the way through the night and back out the other side, but we had enormous fun and I made some great friends.  In fact, I think it's fair to say that I don't think I've ever enjoyed work as much, before or since.

It was great.  Sometimes I still miss it and often think that I'll never feel like that at work again.

I mention this because, a few years later and in a different role in another part of the business, a colleague mentioned to me - in passing - that she used to have one meeting a week in that building in the town centre where we had worked.  I think without realising that I used to work there, she told me how she went there every Wednesday evening for a couple of hours to work on a particular project.  She used to dread it, she told me, because the people who were working there were unbearable.

Yes.  Completely insufferable.  Totally wrapped up in themselves and convinced that they were the bees knees.  Awful people.  Smug; arrogant; obnoxious.

To be honest, this was a bit of a shock.... but I also have enough self-awareness to realise that what she was saying was probably true.  I was wrapped up in what we were doing at the time, but I also remember those people who used to come into our building once a week.  I don't remember going out of my way to make them feel unwelcome or anything like that, and nor would I describe any of us as being particularly obnoxious or full of ourselves.... but they just seemed so unimportant to me; irrelevant and I paid them no attention.  It seems they received that message loud and clear: we felt we were the bees-knees and they were not.

Every time I see the girl that told me that story - and I saw her today - I am reminded of how we must have made her feel.  Sure: we didn't mean to make them feel unwelcome, nor did we want to come across as smug and obnoxious.... but to her, we did.

That was a happy time for me, but I think it's good to be reminded from time-to-time what other people might see when they look at you.  It doesn't make me feel proud.

They used to have a mantra for the main characters on Seinfeld that there should be "no hugging, no learning."  This meant few happy endings, with each episode instead far more likely to end up with a richly deserved comeuppance.

I try and bear that in mind both personally and professionally.

I'm not suggesting we need to go as far up the sliding scale of sitcoms as Friends (all hugging and learning).....but is there some middle ground we can agree to occupy?  Some hugging, some learning?

Frasier, perhaps? Black Books? Or should I just accept that if my career is a sitcom, there's only one possible choice?

Email ThisBlogThis!Share to TwitterShare to FacebookShare to Pinterest
Labels: my brilliant career, no hugging no learning