eagerly pursuing all the latest fads and trends....

You know this already, but I'm right at the bleeding edge of fashion.  Yes.  C'est vrai. 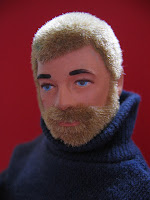 C. returned from London late last night having spent all day down there working.  In a slightly surprised tone, she remarked that almost every guy that she saw in the trendier coffee shops there - coffee shops, I can't help but notice, that she clearly frequents - was attempting to rock my look: tan brogues, leather jackets and a beard.

This is, you will remember, apparently called the "urban lumberjack" look.... a look that I adopted some time before I read about it in the Sunday Times Style magazine.  For reasons that I can't quite fathom, C. seems to find it remarkable that, although I am not at all interested in fashion, I seem to have a knack for being ahead of the curve.

As I pay no attention to these things, I'm flattered that she thinks so.  I don't really believe her, but I'm flattered nonetheless.

London likes to think that it's at the centre of every fashion.  No, scratch that.... at the centre of everything.  I used to have a friend from London who would visit us here in Nottingham and make ridiculous remarks that betrayed quite how in love many Londoners are with themselves and how little they think of the provinces:

"You have Pret a Manger here now?"
"You're allowed to wear trainers into most clubs in London"
"Starbucks? Since when?"

I remember him being astonished that we had a vegetarian fast food restaurant.  He'd never seen one of them in London (although, please don't tell me..... I'm sure they had them long before anyone else). 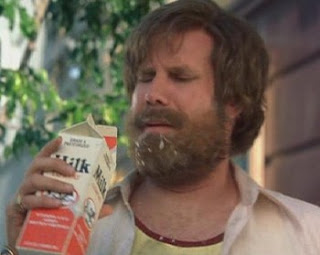 a hipster in London, yesterday.

In actual fact, when it comes to the urban lumberjack look, it seems that Nottingham is about fifty years ahead of London: at the book launch the other week, I was approached by an elderly gentleman.

"I like your shoes"
"Thank you very much"
"Do you mind if I ask where you got them?"
"From Loakes"
He nodded approvingly.  "Ah yes.  Loakes."
He then wandered slowly off, as I basked in the warmth of a shared appreciation of classic English footwear.

You just know that he was rocking this look in 1953, don't you?  They all wore baggy tweed caps oop'ere back then too, you know.  'Ave they got them in that London yet?

(for reference, Londoners, you might want to think about accessorising your beard and brogues with a waxed cotton bag.  I'm just saying.  Mark my words.  I did that months ago, but you'll get there eventually, I'm sure).
Posted by swisslet at 18:30